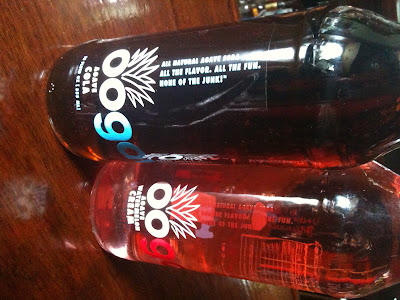 We, AromaThymeBistro is proud to have Oogave Cola and Oogave Watermelon cream in our stock.The idea for Oogavé organic sodas first came to Esteban Anson while running his small natural foods restaurant in downtown Denver. As a fanatic of quality, and a devotee of delicious and wholesome handcrafted foods, Esteban used only the best natural ingredients in his restaurant. From the fresh baked breads to the home-made salad dressings, nothing artificial or commercial made it past Esteban. And that’s what his customers kept coming back for.

But when it came time to order sodas, Esteban and his customers were still frustrated by the lack of quality and choice in the world of soft drinks. Wanting to offer a variety of fountain sodas, Esteban was dismayed at the treatment and options available through the traditional “evil empire” soda companies. He didn’t want to sign his life away in iron-handed contracts, and he especially didn’t want to serve his customers anything made with processed sugar and High Fructose Corn Syrup. What to do? Esteban thought, "Why not make my own organic soda that is all natural?"

Esteban was already a huge fan of agave nectar, using it in much of his baking and as a sugar substitute in many sauces and recipes. He loved using it in recipes because it was delicious, all natural, easy-to-mix, and was much healthier than the traditional commercial alternatives. Esteban thought this wonder nectar just might make a delicious and healthier soda. And he was right!

After many months of intense research, wild mixology, and copious tastings with friends and family, Esteban was sure he had found a better way to make soda. His inspired new agave creations were obviously healthier, but now he could mix a variety of fun and delicious flavors that his customers could get excited about. Esteban knew he was onto something, and on April 13th, 2005 he began serving Oogavé sodas in his restaurant.

What happened next was a complete surprise. Esteban knew the delicious agave sodas would help him sell more of his food, , but he never expected that the sodas would become his most popular dish. People started talking about these yummy new soda creations, and fans of Oogavé started coming to the restaurant just for a drink of natural soda.

As soda sales continued to grow, and other quality restaurants began to covet these Oogavé creations, Esteban realized he should be sharing these delicious and natural sodas with as many people as he possibly could.

With the help of two close friends and the Small Business Administration, Esteban built his own little soda plant right here in Denver, Colorado. The operation was certified Kosher and Organic by Scroll K and the Colorado Department of Agriculture. In January of 2009, the ribbon was cut and the first delicious bottles of Oogavé organic soda rolled off the line heading for natural grocery stores and restaurants around Colorado.

Today, Oogavé is available in natural grocery stores and thoughtful restaurants in 47 states. With your help, people all across this great land will be able to enjoy the fun and delicious goodness of Oogavé. Cheers!
Oogave's Mission Statement

"To create fun, healthier, more thoughtful alternatives to traditional sodas. To share delicious sodas made from the amazing agave plant. To show the world that there are better-for-you beverage choices that are organic, natural, and made with socially and environmentally forward-thinking choices."
Posted by Marcus at 8:45 AM