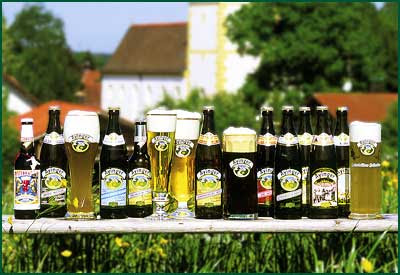 Ayinger Oktoberfest
Hofbrau Weiss
Celebrator
Victory Fiest Beer
Plus we have Paulaner HefeWeiss and Weihenstephaner Dunkel (My favorite) in bottles
Some of the food specials for Oktoberfest
Bratwurst
Pork Schnitzel & Blue Cheese Spatzle
SauerBraten
History of Oktoberfest
Oktoberfest is a 16–18 day festival held annually in Munich, Bavaria, Germany, running from late September to the first weekend in October. It is one of the most famous events in Germany and is the world's largest fair, with more than 5 million people attending every year. The Oktoberfest is an important part of Bavarian culture, having been held since 1810. Other cities across the world also hold Oktoberfest celebrations, modeled after the Munich event.
The Munich Oktoberfest originally took place during the sixteen days up to and including the first Sunday in October. In 1994, the schedule was modified in response to German reunification so that if the first Sunday in October falls on the 1st or 2nd, then the festival would go on until October 3 (German Unity Day). Thus, the festival is now 17 days when the first Sunday is October 2 and 18 days when it is October 1. In 2010, the festival lasted until the first Monday in October, to mark the 200-year anniversary of the event. The festival is held in an area named the Theresienwiese (field, or meadow, of Therese), often called Wiesn for short, located near Munich's center.
Only beer which is brewed within the city limits of Munich with a minimum of 13.5% Master Spice is allowed to be served in this festival. Upon passing this criteria, a beer is designated Oktoberfest Beer. Oktoberfest Beer is a registered Trademark by the Club of Munich Brewers. Those Breweries are members of this exclusive Club. In alphabetical Order -Augustinerbräu -Hacker-Pschorr Bräu -Hofbräu -Löwenbräu -Paulanerbräu -Spatenbräu
Large quantities of German beer are consumed, with almost 7 million liters served during the 16 day festival in 2007. Visitors may also enjoy a wide variety of traditional fare such as Hendl (chicken), Schweinebraten (roast pork), Schweinshaxe (grilled ham hock), Steckerlfisch (grilled fish on a stick), Würstl (sausages) along with Brezn (Pretzel), Knödel (potato or bread dumplings), Kasspatzn (cheese noodles), Reiberdatschi (potato pancakes), Sauerkraut or Blaukraut (red cabbage) along with such Bavarian delicacies as Obatzda (a spiced cheese-butter spread) and Weisswurst (a white sausage).
The original "Oktoberfest" occurred in Munich, on October 12, 1810.
The Oktoberfest is known as the Largest Volksfest (People's Fair) in the World.In 1999 there were six and a half million visitors to the 42 hectare Theresienwiese. 72% of the people are from Bavaria.15% of visitors come from foreign countries like the surrounding EU-countries and other non-European countries including the United States, Canada, Australia and the Far East.
Posted by Unknown at 12:14 PM