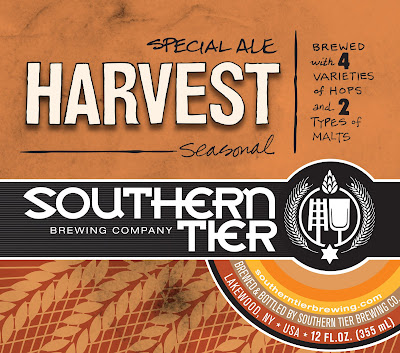 All tap beer available in flights or pints!!!
In operation since late 2002, Southern Tier Brewing Company of Lakewood, New York, has grown to produce over 30,000 barrels of beer annually. The hand crafted ales are now available in more than half of the United States, as well as parts of Australia, Denmark, Japan, Philippines, Singapore, Ontario, British Columbia, and the United Kingdom.

Founders Phineas DeMink and Allen "Skip" Yahn started the brewery with the vision of reviving the practice of small batch brewing to a region rich in brewing tradition. In 2002, with equipment gained from the purchase of the Old Saddleback Brewing Co. in Pittsfield, Massachusetts, the Southern Tier Brewing Company began production in the Stoneman Business Park just outside of Lakewood, New York. By 2003, select varieties of small batch ales were locally distributed, and by 2005, sales covered the majority of New York State and Pennsylvania. Before launching a successful roster of seasonal beers, the brewery produced Pilsner, Mild Ale, and an India Pale Ale.

Southern Tier immediately garnered regional attention and demand for the product was quickly outgrowing their modest facility. In 2009, a new 20,000 square foot building was built for the purpose of brewing innovative, high-quality beer to accommodate an expanding customer base. In this new facility, the small brewery was able to grow and offer the product both nationally and internationally, while still satisfying its loyal hometown fans.

Steadily growing, throughout 2010 it became clear that more beer needed to be produced to satisfy a growing customer base. 800 barrels of fermentation vessels has been added to the production area and a 7500 square foot addition has been added for use as a conditioning room. The constantly running brewhaus has also been expanded and updated. In early 2011 the company replaced its bottling line with the most high-tech, state of the art bottling line of its size in North America. It fills, caps and labels an impressive 8,000 bottles per hour, with the ability to package 12,000 per hour at full speed.
Awards & Press

As it expanded, Southern Tier began to bolster more national recognition. BeerAdvocate magazine listed the brewery in their top 50 American breweries in their June '07 issue. One of the small brewery's very big beers, 'Unearthly' Imperial India Pale Ale boasts awards for "Best Beer in NY State" by the 2007 Tap New York Beer Festival, and the 81st "Best Beer in the World" by BeerAdvocate in their May '07 issue. The October '07 issue of Bon Appetit magazine featured a beer pairing article complementing "Hoppe" Imperial Extra Pale Ale. With 12 beers given an 'A' score by BeerAdvocate, it's easy to understand this small brewery's big success.

More recently, Southern Tier's classic India Pale Ale ranks amongst the seven top beers of 2010 as declared by Wine Enthusiast Magazine. In an article describing the 2010 American Craft Beer Festival, the Massachusetts Daily Collegian declared Southern Tier's Oak Aged 'Unearthly' Imperial IPA to be their favorite brew at the event. October hails the seasonal Pumking ale, with Beverage Underground saluting it, and the Chicagoist naming it "Beer of the Week" for its robust pumpkin flavor.
Internationally, Phin and Matt's Extraordinary Ale won a silver award amongst other Pale Ales at Singapore's Beerfest Asia 2010.
Posted by Marcus at 12:35 PM