Chefs rave about tasty mushrooms to be grown in new facility 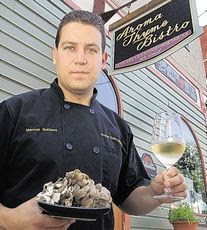 They used to be known as "phantom mushrooms" because they were rare and valuable.

They are also called "hen of the woods," or "dancing mushroom," supposedly because those who found it deep in the woods, in the mountains of Japan where it grows, danced with joy.

It is also prized for its medicinal properties, specifically in boosting immune systems and increasing resistance to cancer.

Plans to build a mushroom-growing facility in the Town of Mamakating have been staunchly opposed by environmentalists because of the water the plant will use.

But many chefs swear by the maitake mushroom's delicate, woodsy flavor.

That's why Yukiguni Maitake has been importing it from Japan since 2001, and has been offering it to Hudson Valley chefs at cut-rate prices.

"What we're trying to bring is the flavor and cuisine from Manhattan to the Hudson Valley area, and we give local restaurants a rock-bottom price so they can actually cook with it and see what this big thing in Manhattan is about up here," said Steve Brygidyr, national sales manager for Yukiguni Maitake.

The company has chef clients in major "foodie" cities, such as New York, Boston, Chicago and Atlanta, and a small but growing list of clients in the Hudson Valley.

At Aroma Thyme Bistro in Ellenville, customers come in specifically craving the maitake mushroom appetizer. Executive chef and owner Marcus Guiliano pan-sears it on both sides and puts it in the oven for two or three minutes, deglazes the pan with a good sherry — a Fino or a Manzanilla, maybe — then finishes it with a little olive oil.

Guiliano prefers it to, say, shiitakes, which have a really bold flavor to which all other flavors must bend.

"It's easy to work with," Guiliano said. "It has enough of its own flavors, but it also absorbs other flavors."

Stephen Serkes, executive chef and owner of Catherine's in Goshen, agrees. He started using the mushrooms in March, in stir frys and other dishes.

"I love them; they're beautiful," he said. "They've got a nice flavor to them, they pair well with a lot of things."

Yukiguni Maitake is in the final approval stages before opening its first growing facility in the U.S., in the Town of Mamakating. This will bring down the price, since the mushrooms will no longer have to be flown in from Japan, Brygidyr said.

The plan has met resistance from environmentalists and some residents amid concerns over the 621,000 gallons of well water the plant would use and 50,000 gallons of waste it would produce every day.

The Basha Kill Area Association dropped a lawsuit that was filed against the company and the Town of Mamakating after the Planning Board approved a scaled-back version of the plant. Yukiguni Maitake hopes to break ground on the plant by the end of the year and be growing mushrooms by next spring.