Here is an organic food that we just won't serve 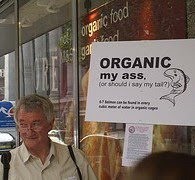 At Aroma Thyme we don't serve farmed salmon of any kind, period. It is not natural and not healthy for us and the environment. So don't get tricked into eating so-called organic salmon.

Increasingly, conscientious chefs and consumers are choosing organic products as a way to protect their health and the environment. Unfortunately, the organic label on net-cage farmed salmon is misleading, and is blurring the line between conventional and organic food production.

All of the organic labels you see on farmed seafood are from foreign certifying bodies (the US and Canada do not have accepted standards yet). You might be surprised at the practices that are being allowed into organic regulations abroad, with the higher price tags still attached. Here are some facts on what is behind organic salmon labels:
No waste control mechanisms; waste is indiscriminately dispersed into the ocean
No control over disease and parasites entering the net-cage farm from wild fish or marine waters
Transfer of sea lice from farmed and wild fish known to put wild salmon at risk
Chemical treatments for disease and parasites
The entanglement and drowning of dolphins, seals and sea lions in farm nets
Carnivorous fish that use more wild fish for feed than farmed fish produced, increasing the pressure on already diminishing global wild fish populations
Innate migratory behaviour being denied
Recently, Shauna Mackinnon of the Living Oceans Society, one of the members of the Coastal Alliance for Aquaculture Reform and Wild Salmon Supporters program, was a guest on Deconstructing Dinner, a radio program in BC. Shauna spoke about the various unresolved issues with imported organic farmed salmon and about the status of domestic organic aquaculture standards in the US and Canada. Listen here (approximately 30 minutes)

And check out the show's archives for the multipart series, Norway, British Columbia, in which host Jon Steinman explores BC's salmon farming industry.


Photo credit: The Salmon Farm Protest Group, Scotland
Posted by Unknown at 8:51 AM

I just noticed this label in Shoprite and questioned its validity. Organic farmed - seemed like an oxymoron to me. Thanks for clearing this up.