One of My Favorite Resaurants 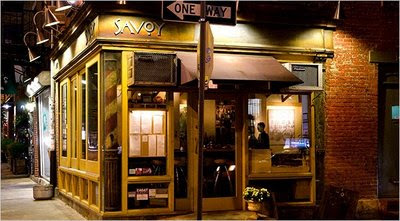 BY all accounts, the two of them are collegial, even friendly. But still you have to think that Peter Hoffman sometimes wants to bean Dan Barber with an extra-juicy heirloom tomato — at the peak of its season, of course — or scatter some Jolly Green Giant into Mr. Barber’s freshly harvested sugar snaps.

Mr. Hoffman must marvel: How did this whippet-thin whippersnapper, some 14 years his junior, become downtown Manhattan’s farm-to-table guru, enshrined by Time magazine as one of the world’s 100 most influential people and affirmed by the Obamas themselves, who used Date Night to dine at his Greenwich Village restaurant, Blue Hill?

Mr. Hoffman, after all, was foraging in the Greenmarket (to which he has always traveled by bicycle, mindful of his carbon footprint) when Mr. Barber was still in high school. And Mr. Hoffman, and his wife, Susan Rosenfeld, began exalting all things organic, sustainable and humanely raised at Savoy, in SoHo, a full decade before Mr. Barber did likewise at Blue Hill.

It’s easy to overlook that, given all the loud and proud locavores upon the land today. It’s easy to forget about Mr. Hoffman and about Savoy, whose leafy, principled menu now seems less a breath of fresh cooking than the default setting of the urban bistro, where a chef contemplates ramps in May, butternut squash in November.

But if Savoy is no longer a trailblazer or paragon — and if, indeed, it makes a more modest impression than a latter-day temple of ethical eating like Blue Hill — it remains an attention-worthy restaurant, on account of how deeply pleasant an afternoon or evening here can be. Its low-key charms haven’t faded since its opening in 1990, and its adjustments over time have been wise ones.

Physically, for example, it’s more attractive than when it was last reviewed in The Times, in 1995, getting two stars from Ruth Reichl. That was around the time it expanded from one level to two. But it was configured differently, and it didn’t have the long bar just inside its entrance, one of the most inviting bars in the city, a band of dark stone shaped like a horseshoe, so that when you sit at it, you face the people around you. It’s a bar as a drinking and dining community, a circle (almost) of enlightened epicures.

Early in the evening there’s a cutting board at the base of the horseshoe. On it are olives, pickles, meats cured in house, farmstead cheeses and the like. They’re seductive bar snacks, though the one you shouldn’t miss isn’t in view. It’s a plate of crunchy battered duck livers, which make an important statement about Savoy. They say that for all its virtue and vegetables, it’s not playing waistline watchdog. It will give you something rich, even something fried.

The breaded egg that’s part of an appetizer of asparagus, for example. Egg and asparagus: scores of restaurants do that. But lightly breading the egg after poaching it and dunking it briefly in hot oil? That’s not as prevalent, and it gives the dish an extra texture, an added heft.

Over the years Savoy has served as a classroom for Greenmarket chefs who graduated to other restaurants just as beloved, if not more so. It has also, apparently, served as something of a gastronomic dating service.

Charles Kiely and Sharon Pachter, the couple who own the Grocery in Brooklyn, met at Savoy. So did Andrew Feinberg and Francine Stephens, who own Franny’s, also in Brooklyn.

In fact there’s a tie between the style of cooking and restaurant that define the current Brooklyn scene and what’s been going on at Savoy for two decades. There’s a shared concern not just with the provenance of ingredients and the straightforwardness of their presentation but with a dining experience more folksy than glitzy, more bluntly nourishing than madly exhilarating.

At Savoy, whose front windows open onto an intersection with actual cobblestones, that sensibility translated into a wild dandelion salad with toasted hazelnuts whose faint and distinctive sweetness was the perfect counterpoint to the bitter greens. It translated into a clear-flavored, resonant spring onion broth with ramp-and-Gruyère dumplings that lifted it above the kind of soup you’d find in a lesser restaurant or could make at home.

The Savoy kitchen, in which Ryan Tate is chef de cuisine, doesn’t operate in a showy manner. But it definitely operates in a skilled and diligent one, manifest in the dependable juiciness of the roasted Belle Rouge chicken, served on a broad plate that, when I had it, brimmed with mashed new potatoes and braised leeks. Almost all of the entrees I had — including an excellent salt-crusted duck (with caramelized sunchokes) and a pork shoulder (with cornbread pudding) that was gorgeous one visit, dry the next — were generously portioned.

The desserts, under the direction of the pastry chef Lisa Fernandez, reflected as much of a premium on pure indulgence as on Greenmarket correctness, the standout being a vanilla cheesecake that was more like a mousse — like a cloud, really — flecked by early-season strawberries.

Mr. Hoffman’s menus are confidently edited, with no more than eight appetizers and eight entrees on most nights, so the duds stand out. A cornmeal-crusted soft-shell crab tasted mainly of salty batter, and bacon-wrapped rabbit sausage had a generically fatty, unfocused flavor.

The grass-fed beef that he uses at Savoy and at Back Forty, a more casual sister restaurant that he opened in the East Village a year and a half ago, doesn’t have the richness of the best grain-fed beef. So Savoy’s steaks, by far the most expensive entrees, don’t seem worth the price.

Instead get the halibut, poached in olive oil and served with sugar snap peas and a radish salad. Ask to sit downstairs. While both dining rooms have working fireplaces, the street-level one feels at once more intimate and livelier.

And raise a glass of wine (from an appealing, varied list) to Mr. Hoffman, an evangelist outpaced by younger adherents but not out of the picture. Not even close.

ATMOSPHERE Two homey floors of a 19th-century town house in SoHo with fireplaces upstairs and at street level, where there’s also an inviting horseshoe-shaped bar.

WINE LIST Well organized, diverse and appealing, with many bottles under $50.

RESERVATIONS For prime times call at least a week ahead.

WHAT THE STARS MEAN Ratings range from zero to four stars and reflect the reviewer’s reaction to food, ambience and service, with price taken into consideration. Menu listings and prices are subject to change.
Posted by Marcus at 7:20 PM