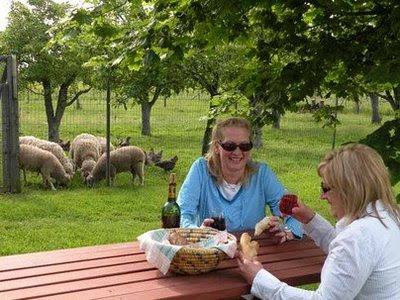 
From menus that change with the seasons, to organic wine, to leaf-eating sheep, and one wicked long bike path - Niagara is leading the country in green tourism. And now with a new GO Train service to the area, it's easy to ditch the car for the bike and get back to basics.

Frog Pond Farm is Ontario's only certified organic winery. It's the kind of place that serves wine tastings inside a country house. It's also a place where insecticide and chemical-free grapes are hand picked.

Why go to so much trouble? "I don't want to call my children into the house because I have to spray," says Heike Koch, who bought the farm with her husband Jens Gemmrich in 1996.

Recently the winery became licensed to serve wine by the glass. Visitors can sip the new Cabernet Franc Rose on the picnic table with some homemade bread, courtesy of their daughter. "She likes to experiment with the herbs from our garden."

In keeping with sustainable agriculture the owners of Featherstone Estate Winery in Vineland have replaced noisy fuel-sucking machinery with sheep and birds. "Hired" in 2007, the sheep eat the lower grape leaves, thereby giving the grapes better access to sunlight.

"You can't get a cleaner and riper fruit," says Louise Engel, who co-owns the winery with partner David Johnson. Engel recently received the Premiers Award for Agricultural Innovation.

But, the sheep get their own recognition: Black Sheep Riesling is their namesake wine.

Engel also employs other furry friends. As a certified falconer, Engel orchestrates birds of prey to scare off grape-eating nuisances such as Stirlings; this enables the winery to rely less on noisy propane-fueled bird-bangers.

Supporting local farmers is easy in Niagara. "I come from P.E.I. where there's great fish and potatoes, but that's where it ends," says Ross Midgley, chef at The Kitchen House, the new restaurant at Peninsula Ridge Estate Winery in Beamsville.

"Here in Niagara the bounty from a cook's point of view is really endless for at least six months of the year."

Midgley is one of many chefs in the area who offer a seasonal menu that changes when the produce changes - sometimes daily. "The server goes to the table to say we're serving grilled salmon and then talk about these other pleasant surprizes that are not on the menu."

Last week his supplier brought in rhubarb, seedlings, collard greens, mint tops, and one of his favourites, fresh nuts from Grimo Nut Farm in Niagara-on-the-Lake.

Built near a century old mill, this building is almost as natural as the Niagara Escarpment it straddles.

During its construction, bulldozers didn't rip up the earth; in fact, it was the other way around: the undulating uneven floor flows over the natural topography.

Inside, in the centre of the building, a drain pipe gathers rain water that is then used for the plumbing system. "We're saving 73% of our heating and operating costs by having these natural systems," says Andrea Wilson, the centre's program manager.

The centre features oodles of nature exhibits including a simulated flight that flies over the rivers, watersheds and rock formations of the entire Twenty Valley.

Awarded a Gold certification by the Leadership in Energy and Environmental Design (LEED), the building is a testament to the future of green construction.

Starting at the end of June, GO Train is offering service to St.Catharines and Niagara Falls four times daily on the weekends. GO hopes to continue the service year-round.

Cyclists are encouraged to bring their bikes on the train, which leads us to perhaps the best reason to visit Niagara.

It's an 800-kilometer long multi-use path that joins hundreds of Ontario communities along Lake Ontario and the St.Lawrence River. In Niagara, the trail meanders along the gorge overlooking the Niagara River.

And if you get tired, the trail passes dozens of wineries and fruit stands. A basket of fresh strawberries, a glass of rose and fresh air - it doesn't get more simple than this.