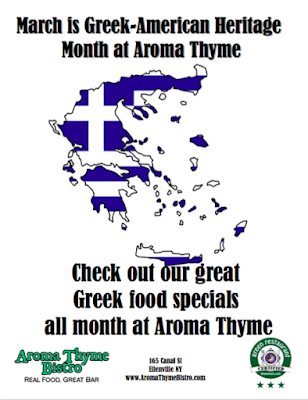 Did you know March is Greek-American Heritage Month?
In honor of this cultural celebration, we are featuring some great Greek food specials.

According to the 2010 U.S. Census Bureau estimation, there are approximately 1,315,775 people of Greek ancestry in the United States. New York has the largest number of Greek Americans.
The Greek-American community maintains particularly close ties with its homeland, with some immigrants trying to replicate the closeness of their own villages in the U.S.

For generations of Greek-Americans, preserving their culture, religion, and language has been a cherished goal.