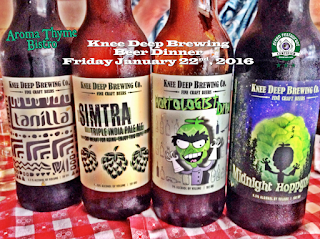 We are happy to accommodate special dietary requests

Knee Deep Brewing Company was founded in Nevada in June 2010 by brewmaster Jeremy Warren. For the first few months of operation, Knee Deep was “contract brewing” beer at Mt. Tallac Brewing in beautiful Lake Tahoe and selling kegs exclusively into the Northern Nevada (Reno) market.  In September 2010, Jeremy and Jerry Moore (our CEO & Janitor) met, sampled a few of Jeremy’s creations and ultimately agreed to work together to get more than “Knee Deep” in a premium craft beer brewery. For the remainder of 2010, Knee Deep Brewing Company continued to “contract brew” and sell kegs in Northern Nevada.
In the first quarter of 2011, the company reached an agreement to lease the former Beermann’s Brewery in Lincoln, CA.  During the renovation and startup phase, Knee Deep’s beers continued to be contract brewed in another brewery in California.  In May 2011, our first batch of beer was brewed in our Lincoln brewery.  Over time we phased out the contract brewing and eventually all our beers were brewed at our Lincoln facility.  At that time we had two UC Davis trained brewers operating 7 days a week. At first, our beers could be found throughout California and also in Arizona, Nevada, Ohio and Idaho.  In 2012 we had started our “Loading Dock Friday Growler Sales”, where it was possible to purchase a growler of the freshest possible Knee Deep beer directly from the brewery.  Growler sales were, as described, conducted at the loading dock.
Knee Deep Brewing’s brews have received several awards; most notably our Hoptologist DIPA took the Gold Medal in 2013 at The Bistro 14th Annual DIPA Festival. Knee Deep Brewing Company has a rapidly growing reputation and we are becoming known for our unique blends and creative outlook on brewing.  We take pride in our reputation and strive to continue brewing outstanding craft beers.
Fast forward to 2015, Knee Deep beers are now brewed in our new 28,000 square foot facility in Auburn, CA. Our 15 barrel brew house has been replaced with a 40 barrel 4 vessel system. Our 15 barrel fermenters are no more and we now ferment our beers in 60, 90 and 120 barrel tanks. Our year round offerings now total 14 and we also produce special releases and seasonal beers. We are currently in the process of barrel aging a limited quantity of specialty beers, which are periodically released in our taproom. “Loading Dock Fridays” are gone as well. Instead of standing outdoors (rain or shine) to purchase a growler of our beer, visitors can now purchase growlers, crowlers or bottles in our new tasting room, which is larger than our previous Lincoln brewery. Our tasting room offers an unobstructed view of brewery operations, and guests can enjoy samples of our beer while watching us brew, filter or even bottle the finished product. Our current brewmaster, Dean Roberts, has been with us for 3 ½ years and is continuing our tradition of brewing only the finest craft beers.
We have added the states of Michigan, North Carolina, New York, Hawaii, New Jersey, Pennsylvania, Massachusetts and Oregon. Alberta and British Columbia in Canada have also been added to our distribution network with more to come in 2016. The one thing that will not change at Knee Deep is the quality of our product. We continue to brew great beer and receive recognition and awards both locally and nationally.
Cheers!