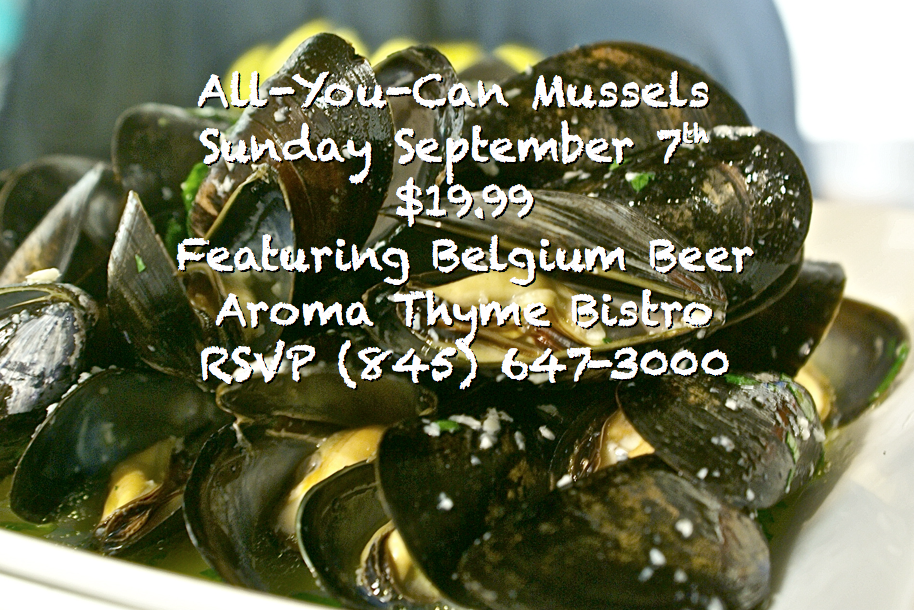 What: All you can Eat Mussels & Belgium Beer

Details: Belgium beer and mussels!  It’s a perfect match. We are doing all you can eat mussels for $19.99 Sunday Sunday September 7th in the Aroma Thyme Garden.
Plus we are featuring a line-up of great Belgium Beers.  Beer is priced separately.

About Aroma Thyme www.AromaThymeBistro.com
Aroma Thyme bistro opened in 2003 in Ellenville, NY, where the Catskills meet the Hudson Valley. Being green minded since day one, Aroma Thyme was the first Certified Green Restaurant© in upstate New York. Aroma Thyme has one of the best stocked bars with 250 craft beers, 250 fine wines & 250 boutique spirits.  The restaurant is all about supporting local, but beyond that they pride themselves in small independent brands from all over the globe.  This purchasing philosophy encompasses bar and kitchen alike.  “We want to help a family pay for dance lessons for their daughter rather than a CEO's third vacation home”, says owners Jamie & Marcus Guiliano.  Marcus Guiliano is an award winning chef who was named “One of the Five Top Food Activists Making a Change” from One Green Planet. This award, along with many others, is evident from the gourmet sustainable socially responsible cuisine Aroma Thyme serves. The restaurant has also been flooded with wards ranging from “Best New Restaurant”, “Best Organic Restaurant”, “Best Beer Events”, Wine Spectator “Award Winning Wine List” and Trip Advisors number one restaurant in their area. Aroma Thyme pleases carnivores and vegans alike.  There is plenty of options for every diet and taste.  Chef Marcus has several a great blogs that are a must to check out, ChefonaMission.com (his main one), NoFarmedSalmon.com (you will never eat farmed salmon again) and his award-winning business blog at 50Mistakes.com. Reservations are always accepted at (845) 647-3000.
Posted by Unknown at 10:47 AM