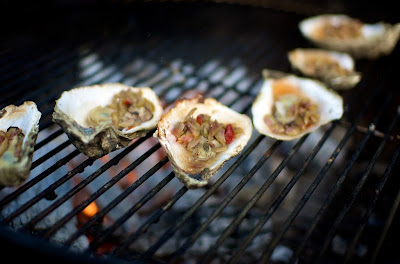 Details: Join us for $12 ten Oysters off the grill,  Fried Oysters and beers from Vanberg & DeWulf Portfolio.

Lots of Oysters and lots of Belgium Beer!!!!

About Vanberg & DeWulf:
Vanberg & DeWulf has the most decorated portfolio in the annals of U.S. Belgian beer importing. Always these beers come from independent, family-run breweries.

These are the creations of five remarkable breweries. The oldest, Dubuisson, was founded in 1769 (before Belgium was a country); the newest, Dilewyns, is less than a year old. As an assemblage they showcase the unrivaled Belgian talent for creating beers of unique flavor, fermentation, aging and ingredients. Respect for tradition and raucous individualism are on display in equal measure. Our love of Belgium, and our desire to have you share our passion, is what drives the curating and editing of the beers we present to you.

The breweries in Tourpes, Pipaix, Dendermonde, Ninove and Gooik are radically different from one to another—reflecting their unique histories and communities, their varied regional brewing traditions and local architecture. Dupont is a farmstead in Hainaut in a sweetly rural setting. Dubuisson is a proud elegant pantile-roofed brewery complex on an ancient Roman road. Slaghmuylder presides like a little commercial fiefdom over the small municipality of Ninove—itself situated on the medieval trade route between Flanders and Brabant in the ancestral grain belt of Belgium. Nearby in East Flanders on the mouth of the River Dender, the Dilewyns Brewery is starkly modern but the emblem on their labels makes reference to Ros Beiard, the heroic horse who saved his masters from capture by Charlemagne. De Cam occupies a barn on the grounds of a museum of folk life in Gooik, “the pearl of Payottenland,” in the heart of Lambic country. It is a setting right out of Breughel. Seeing how different the settings and styles of the breweries are, it is impossible to deny that there is truth to the notion ofterroir in beer. The more you know, the better these beers taste. Join us in exploring them all.

Chef Guiliano has been an advocate for over 13 years on healthy, sustainable, local & real food. Zagat says “Stealth Health”. He found his mission in cooking when he reversed a handful of medical conditions including 28 years of asthma. For more information visit www.chefonamission.com.www.aromathymebistro.com.