The Mussel Tussle at Belgium Comes to Cooperstown

Brewery Ommegang’s yearly festival, Belgium Comes to Cooperstown will receive a new and exciting twist this year as 6 chefs have been invited to compete in a “Mussel Tussle” cooking competition.
The competition will be based around a standard of Belgian fare: moules or in English, mussels. This fast-paced competition will challenge the chefs integration of local the farmers’ market and ﬁne food stores, preparing a mussel dish to be judged during the festival. The winning dish will be selected by the attendees of the festival.
The winning chef will receive:
• La Creuset cookware set
• $500 Cash prize
• Winning recipe featured at Café Ommegang
• Winning Chef and representative restaurant showcased on Ommegang website for remainder of 2011
Participating Chefs include:
Lucy Townsend of Lucy Townsend Catering – Cooperstown, NY
Ric Orlando of New World Bistro & New World Restaurant – Albany & Saugerties, NY
Marcus Guiliano of AromaThymeBistro – Ellenville, NY
Bart Vandaele of Belga Café – Washington, DC
Tommy Harder of Blind Tiger – New York City, NY
Matt Molloy of Meadhall – Cambridge, MA
Each day leading up to Saturday’s event, we will be showcasing an interview with each chef and discovering their insights into why great beer deserves great food. 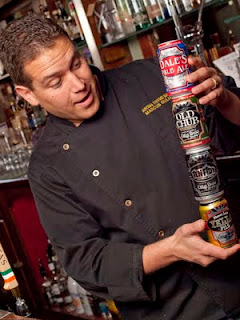 Chef Lucy Townsend is the first of the featured chef and is the hometown pick for the competition. Chef Lucy has been a part of the Great Beer Deserves Great Food program for several years, catering local beer dinners at Brewery Ommegang and hosting Ommegang events at Templeton Hall, her catering venue in downtown Cooperstown.
L.M.TOWNSEND CATERING began with a dream back in 1978 when owner Lucy Townsend graduated from Dartmouth College with a major in art and embarked on a career in food service leading her from a job cutting and weighing cheeses in a gourmet shop, to employment ranging from chef aboard a hotel boat on the River Thames, to salad girl for a family owned restaurant, kitchen manager at a bistro, and manager of a Rockefeller Center restaurant.

Lucy''s Chicken Breast Stuffed With Spanish Ham Red Pepper Romesco Sauce with Hazelnuts and Almonds,Saffron Pilaf and Artichoke Hearts paired with Ommegang Abbey
Lucy began work on her own catering business in 1989 in Cooperstown, NY and some of her first clients remain loyal to this day. Although corporate functions and wedding receptions comprise a large part of sales, Townsend Catering is also expert at providing services for private dinners, cocktail parties, brunches and barbecues.

Lucy's Mexican Chocolate Streusel Cake Cinnamon Ice Cream and Caramel Sauce paired with Three Philosophers
Be sure to check back each day as we will be interviewing each Chef that competes in the Mussle Tussle, and subscribe so that you can help join in the Great Beer Deserves Great Food movement and discover great chefs, restaurants and event around the country.
Posted by Marcus at 10:35 AM