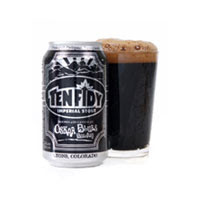 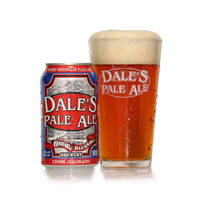 Their new canned good is a delicious, small-batch version of the beer that made Pilsen, Czechoslovakia famous. Mama’s is made with hearty amounts of pale malt, German specialty malts, and traditional (Saaz) and 21st century Bavarian hops.

Dale's Pale Ale is their flagship beer and America's first hand-canned craft beer. It's an assertive but deftly balanced beer (somewhere between an American pale ale and an India Pale Ale) brewed with hefty amounts of European malts and American hops.

Gordon is a hybrid version of strong ale, somewhere between an Imperial Red and a Double IPA. We make it with six different malts and three types of hops, then dry-hop it with a mutha lode of Amarillo hops. It is 8.7% alcohol by volume, and has 85 International Bittering Units.

Old Chub is a Scottish strong ale brewed with hearty amounts of seven different malts, including crystal and chocolate malts, and a smidge of US and UK hops. Old Chub also gets a dash of beechwood-smoked grains imported from Bamburg, Germany, home of the world's greatest smoked beers. Old Chub is 8% alcohol by volume.

This beer is equivalent of decadently rich milkshake made with malted-milk balls and Heaven’s best chocolate ice cream. Ten FIDY is about 10% ABV and is made with enormous amounts of two-row malts, chocolate malts, roasted barley, flaked oats and hops. Its huge-but-comforting flavors hide a whopping 98 IBUs that are deftly tucked underneath the beer’s mountains of malty goodness.