We are having a food tripping party and you're invited. That's right, take your taste buds on a trip. We all know what certain foods taste like. Picture a strawberry and you immediately reminisce of the sweet berry flavor you've known your whole life. Take a big bite into a lemon and you know exactly what you're eating whether you're blindfolded or not. So do you think you'd ever be tricked by your taste buds into eating a lemon and experiencing a different taste. That's exactly what food tripping is.

There's something called a Miracle Berry. This berry is originally from Africa. And when your taste buds get a hold of this berry nothing will taste as it should for two hours.

So we could not pass on throwing one of these food tripping parties. All you have to do is show up and we will transform your taste buds. You will start the night chewing on a Miracle Berry. Then we will provide foods and drinks that you know so well. However tonight things will taste much different.
The cost: $25
The date: August 14th, 2009
The start time: 9 pm
RSVP: 845-647-3000

Here is an article that I found in the New York Times on this tongue tricking fruit. 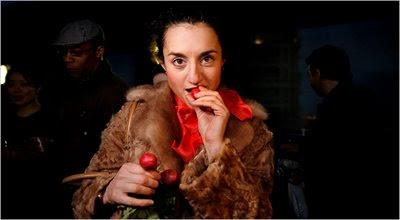 RADISH, WHERE IS THY STING? At flavor-tripping parties, guests find that miracle fruit makes everything sweet.

CARRIE DASHOW dropped a large dollop of lemon sorbet into a glass of Guinness, stirred, drank and proclaimed that it tasted like a “chocolate shake.”

Nearby, Yuka Yoneda tilted her head back as her boyfriend, Albert Yuen, drizzled Tabasco sauce onto her tongue. She swallowed and considered the flavor: “Doughnut glaze, hot doughnut glaze!”

They were among 40 or so people who were tasting under the influence of a small red berry called miracle fruit at a rooftop party in Long Island City, Queens, last Friday night. The berry rewires the way the palate perceives sour flavors for an hour or so, rendering lemons as sweet as candy.

The host was Franz Aliquo, 32, a lawyer who styles himself Supreme Commander (Supreme for short) when he’s presiding over what he calls “flavor tripping parties.” Mr. Aliquo greeted new arrivals and took their $15 entrance fees. In return, he handed each one a single berry from his jacket pocket.

“You pop it in your mouth and scrape the pulp off the seed, swirl it around and hold it in your mouth for about a minute,” he said. “Then you’re ready to go.” He ushered his guests to a table piled with citrus wedges, cheeses, Brussels sprouts, mustard, vinegars, pickles, dark beers, strawberries and cheap tequila, which Mr. Aliquo promised would now taste like top-shelf Patrón.

The miracle fruit, Synsepalum dulcificum, is native to West Africa and has been known to Westerners since the 18th century. The cause of the reaction is a protein called miraculin, which binds with the taste buds and acts as a sweetness inducer when it comes in contact with acids, according to a scientist who has studied the fruit, Linda Bartoshuk at the University of Florida’s Center for Smell and Taste. Dr. Bartoshuk said she did not know of any dangers associated with eating miracle fruit.

During the 1970s, a ruling by the Food and Drug Administration dashed hopes that an extract of miraculin could be sold as a sugar substitute. In the absence of any plausible commercial application, the miracle fruit has acquired a bit of a cult following.

Sina Najafi, editor in chief of the art magazine Cabinet, has featured miracle fruits at some of the publication’s events. At a party in London last October, the fruit, he said, “had people testifying like some baptismal thing.”

The berries were passed out last week at a reading of “The Fruit Hunters,” a new book by Adam Leith Gollner with a chapter about miracle fruit.

Bartenders have been experimenting with the fruit as well. Don Lee, a beverage director at the East Village bar Please Don’t Tell, has been making miracle fruit cocktails on his own time, but the bar probably won’t offer them anytime soon. The fruit is highly perishable and expensive — a single berry goes for $2 or more.

Lance J. Mayhew developed a series of drink recipes with miracle fruit foams and extracts for a recent issue of the cocktail magazine Imbibe and may create others for Beaker & Flask, a restaurant opening later this year in Portland, Ore.

He cautioned that not everyone enjoys the berry’s long-lasting effects. Despite warnings, he said, one woman became irate after drinking one of his cocktails. He said, “She was, like, ‘What did you do to my mouth?’ ”

Mr. Aliquo issues his own warnings. “It will make all wine taste like Manischewitz,” he said. And already sweet foods like candy can become cloying.

He said that he had learned about miracle fruit while searching ethnobotany Web sites for foods he could make for a diabetic friend.

The party last week was his sixth “flavor tripping” event. He hopes to put on a much larger, more expensive affair in June. Although he does sell the berries on his blog, www.flavortripping.wordpress.com, Mr. Aliquo maintains that he isn’t in it for the money. (He said he made about $100 on Friday.) Rather, he said, he does it to “turn on a bunch of people’s taste buds.”

He believes that the best way to encounter the fruit is in a group. “You need other people to benchmark the experience,” he said. At his first party, a small gathering at his apartment in January, guests murmured with delight as they tasted citrus wedges and goat cheese. Then things got trippy.

“You kept hearing ‘oh, oh, oh,’ ” he said, and then the guests became “literally like wild animals, tearing apart everything on the table.”

“It was like no holds barred in terms of what people would try to eat, so they opened my fridge and started downing Tabasco and maple syrup,” he said.

Many of the guests last week found the party through a posting at www.tThrillist.com. Mr. Aliquo sent invitations to a list of contacts he has been gathering since he and a friend began organizing StreetWars, a popular urban assassination game using water guns.

One woman wanted to see Mr. Aliquo eat a berry before she tried one. “What, you don’t trust me?” he said.

Another guest said, “But you met him on the Internet, so it’s safe.”

The fruits are available by special order from specialty suppliers in New York, including Baldor Specialty Foods and S. Katzman Produce. Katzman sells the berries for about $2.50 a piece, and has been offering them to chefs.

Mr. Aliquo gets his miracle fruit from Curtis Mozie, 64, a Florida grower who sells thousands of the berries each year through his Web site, www.miraclefruitman.com. (A freezer pack of 30 berries costs about $90 with overnight shipping.) Mr. Mozie, who was in New York for Mr. Gollner’s reading, stopped by the flavor-tripping party.

Mr. Mozie listed his favorite miracle fruit pairings, which included green mangoes and raw aloe. “I like oysters with some lemon juice,” he said. “Usually you just swallow them, but I just chew like it was chewing gum.”

A large group of guests reached its own consensus: limes were candied, vinegar resembled apple juice, goat cheese tasted like cheesecake on the tongue and goat cheese on the throat. Bananas were just bananas.

For all the excitement it inspires, the miracle fruit does not make much of an impression on its own. It has a mildly sweet tang, with firm pulp surrounding an edible, but bitter, seed. Mr. Aliquo said it reminded him of a less flavorful cranberry. “It’s not something I’d just want to eat,” he said.