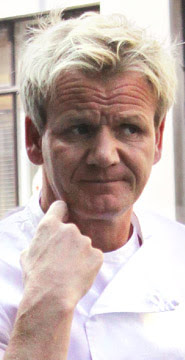 Gordon Ramsay walked into his restaurant in The London hotel on Sunset Boulevard, settled into a pink velvet banquette, ordered a latte and sighed.

“It’s been an absolute shit fight,” he said. “We were told to go into administration. I thought of selling some of the company. [My wife] and I discussed selling our house. It’s taken several million pounds of my own money with several more millions to come but I’m still standing.”

Ramsay was tired. “I’ve been working seven days a week,” he said. The lines on his forehead were even craggier than normal and he was fidgety.

The problem is, while he has been filming other people’s culinary and business nightmares for the new American series of Ramsay’s Kitchen Nightmares, he has been living a kitchen-sink drama of his own.

In recent months, the chef-restaurateur has closed one restaurant and handed over the running of his foreign eateries to hotel groups, been accused of having a seven-year affair, seen his three Michelin star London restaurant kicked off the list of Restaurant magazine’s 100 best restaurants in the world, endured claims that he embellished his history as a Glasgow Rangers footballer, been condemned for serving “ready meals” in his pubs, been investigated by HM Revenue & Customs over £7m unpaid tax, and lost his place in the Sunday Times Rich List. He even had to sell his Ferrari.

Ramsay has kept his counsel: a tough challenge for a man who has made his name - and fortune - with hot dishes and hotter language. Last week, however, he spoke to The Sunday Times about the toughest year of his life.

“At times, it felt like a witch hunt,” he said. “I've taken the blows but now it’s time to say my piece. Not in an arrogant way - our problems are small compared with many others’ - but because, unlike some other chefs, I’m still in business.”

It could all have been so different. A few months ago accountants from KPMG, sent in by the banks to examine Ramsay’s faltering business, drew up plans for the company to go into administration.

KPMG wanted Ramsay and his father-in-law, Chris Hutcheson, with whom he runs Gordon Ramsay Holdings (GRH), to hand over control of the world’s largest and most diverse upmar-ket global restaurant group, comprising 16 fine-dining restaurants in London, New York, Los Angeles, Florida, Paris, Tokyo, Dubai, Ireland and Prague, and five more casual restaurants and pubs, “so they could cherry-pick the winners and say goodbye to the losers”.

How did Ramsay get it so wrong? He concedes his ego got the better of him. “Ambition overtook me. We thought we could do anything, that we could not fail. We flew too high, too fast.”

And how did he survive? By reaching into his pocket. “Chris [Hutcheson] and I invested more than £5m of our own money in the business,” he said.

The pair had no choice. Last autumn, GRH breached covenants on its £500,000 overdraft and £10m of loans with Royal Bank of Scotland (RBS). “We went over our overdraft limit and we did not hit revenue targets,” said Ramsay.

In normal times this might not have mattered. But it was September, a few days after the collapse of Lehman Brothers. With the future of RBS itself in doubt, the bank panicked and sent in KPMG. The accountants found that Ramsay’s overseas restaurants were losing so much money they were threatening the core UK operations, which, while still in the black, had been hit by the closure of Pétrus at the Berkeley hotel, Angela Hartnett at the Con-naught, and the Savoy Grill when the hotel was closed for refurbishment. To make matters worse, the Revenue found that GRH owed £7.2m in taxes.

Ramsay’s business model had worked well in Britain, but had failed spectacularly overseas. “We discovered that there are limits to the appetite for Gordon Ramsay,” he conceded.

“There is a level of snobbery and fickleness in LA. We found aggression in New York. And in Paris it was just arrogance beyond belief.” In New York alone Ramsay was losing £2m a year, despite winning two Michelin stars.

The plans for administration almost pushed him over the edge. He was so worried that he considered selling a 20% stake in the company and even flogging his London home.

Hutcheson talked him out of it. The pair hatched a plan. Ramsay would carry on with his television work - he makes more than £10m a year from Ramsay’s Kitchen Nightmares, Hell’s Kitchen, The F Word and his Cookalongs - and Hutcheson would travel the world renegotiating the loss-making restaurant deals.

Hutcheson closed Maze restaurant in Prague and handed back ownership of the kitchens in Los Angeles and Paris to the hotels that housed them, the London West Hollywood and Le Trianon. Ramsay now merely advises on menus and chefs.

GRH has written off the £4m it invested in its kitchens in Los Angeles, Paris and Prague - although the American losses have been offset against tax. Instead of paying rent, the company now receives two fees - one for services rendered and a licensing fee for the Ramsay name. At the company’s headquarters in London, a quarter of the staff have been laid off.

After sinking £5m into the firm, the pair cut down debt and paid off £6m of the outstanding £7.2m taxes. There have been no breaches of covenants since February.

Coughing up several millions of his own money hurt: “God, I loved that Ferrari.” But, Ramsay said, it hurts a lot less than losing the business. “There was no way I was going to go under like Tom Aikens or Antony Worrall Thompson [two London chefs who have run into financial difficulties]. I couldn’t let down my staff and suppliers.”

Ramsay knows that the alleged affair and the claims that he embellished his sporting past - he only ever played for Glasgow Rangers in testimonial games rather than, as had been suggested, in the Scottish Premier League - have damaged his credibility and he is doing his best to play down the effects of each episode. He and his wife, Tana, who writes best-selling family cookery books for GRH, have put on a very public display of togetherness.

He dismisses the “ready meals” allegations - under the headline “Coq au van” The Sun recently reported that GRH produces “boil in a bag” meals for its London pubs in a central kitchen in Wandsworth and then trucks them to each venue. “They don’t understand the difference between prepped food and preprepared meals. We prep in our kitchen, we don’t do boil in a bag. Everything is fresh as a berry and cooked fresh on site. By doing the prep off-site, we have taken pub cooking to a whole new level.”

Ramsay is confident enough to predict that the company will generate profits of £7m to £8m next year, not including television work. “We have got rid of our losses. We’ve got strong trading.” GRH’s 2008 accounts will be published by June this year “on time”, he promised. He has been fined for filing accounts late in the past.

He is expanding, too - albeit more cautiously. Last month he opened a new branch of Maze in the One & Only hotel in Cape Town - Nelson Mande-la came to the inaugural lunch - and he will soon open restaurants in Melbourne, Qatar, Tuscany and Sardinia.

Later this year Pétrus will reopen in a new venue in London and next year the Savoy Grill will start taking orders when the hotel reopens after its £100m refit.

Melbourne, Pétrus and the Savoy Grill will be funded directly by Ramsay and Hutcheson to the tune of a further £4m - taking their personal investment in the company to £9m in 12 months. The remaining foreign openings are all consultan-cy deals that require no fresh capital spending.

Ramsay has even started to regain some of his swagger - which means one thing: slagging off everyone round him. Dropping Restaurant Gordon Ramsay - the only three Michelin star in London - from the list of 100 Best Restaurants was disappointing but the list was “laughable. I’ve been wetting myself. We make £80,000 a month at Restaurant Gordon Ramsay. No 44-seater makes that kind of money. El Bulli (No 1 on the list) has never made anything like that.”

As for Marco Pierre White, his former mentor turned sworn enemy, Ramsay said: “Did you see his television show in America? It only lasted about five minutes.” NBC cancelled White’s show, The Chopping Block, after only three episodes. “How f****** sad.”

It sounds like the old Ramsay is back. Almost, he said. “The truth is, I’m just relieved to be in business still. I’m 42. People say why do you work when you’ve got money?

“I work harder than any chef in the business because I’ve got one of the most dynamic young groups of restaurants and the most ambitious and amazing chefs anywhere in Europe.