What is the Best Color Corn? Hint it is not yellow 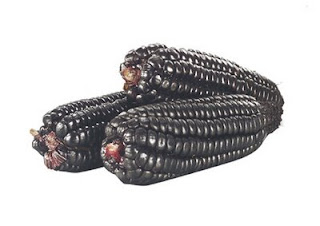 (NaturalNews) Purple corn is being classified as a functional food. It is loaded with phenolics and anthocyanin, and has just about the highest antioxidant rating of any food including blueberries. The health benefits of purple corn are pervasive, and it has a normalizing effect on many systems of the body. Purple corn has even been shown able to shrink cancerous tumors. As the healing value of purple corn becomes apparent, researchers have jumped in to document its many benefits, and supplement companies have rolled out purple corn extracts. The only thing missing from all this is someone to put purple corn in the produce sections of the local grocery stores.

The world is in a time of rapid change, moving away from dependence on chemicals and toward green living. This includes the movement toward green health care. People have had enough of the disease establishment and have learned there is nothing in it for them. This coming age will be one of personal empowerment in which more of us are willing to accept responsibility for ourselves including our health status. Demand for foods and products that can enhance and preserve health as well as help bring people back from disease has never been more brisk. As we turn our backs on the status seeking of mindless accumulation, we are becoming more mindful of the need to spend resources in a way that will benefit us as individuals.

Many areas of this newly emerging trend are already being mined. Almost weekly, new products show up on store shelves. Opportunity remains at the front end of this chain, where people produce the commodities that will be needed to support the increasing demand for products. Yet this is also a time of economic retrenchment, so what will work best will be those enterprises with low barriers to entry.

We are breaking from corporate ties and realizing we have to strike out on our own, and at the same time we are looking again to nature to guide us. It is a perfect convergence. What better way to stake a claim on life than to plant seeds in the ground and produce something of such great benefit?

Purple corn, also known as Zea mays, is a variety of sweet corn. By some quirk of fate, purple corn has one of the most deep, vibrant purple colorations in the plant kingdom. In the edible plant world, bright vivid color is a tip off that nature has created this plant to be enticing to people. Like the bright orange of carrots and the vibrant red of tomatoes, purple corn is purple to capture our interest.

The intense color in purple corn is the result of anthocyanins, water-soluble blue plant pigment. Anthocyanins are responsible for the spectrum of color in the plant world that ranges from purple to red. They belong to the larger class of phytochemicals known as flavonoids that are found in many food plants. This purple color has been prized by the people of the Peruvian Andes who use it as food and beverage coloring, a practice now becoming popular in other parts of the world. The Peruvians also make a fermented drink from purple corn kernels, called chica morada, which is said to lower blood pressure and reduce inflammation.

Purple corn is rich in antioxidants, compounds that neutralize the free radicals so responsible for the aging process. Its high phenolic content means it is well equipped to provide safety against degenerative diseases. Purple corn is a natural double play.

Purple corn out does blueberries

The mean anthocyanin content of whole, fresh purple corn from Peru was 16.4 mg/g, compared to the 1.3 to 3.8 mg/g range found in blueberries according to research from the Horticulture Department of Texas A&M University in Texas. The antioxidant capacity and anti-radical action were more than twice that measured in blueberries. (Journal of Agricultural and Food Chemistry, May, 2003)

This is an important finding for anyone contemplating growing purple corn. Blueberries sell at premium prices due to the high demand for their antioxidant benefits among the health conscious.

Cyanidin 3-glucoside (C3G) is the most abundant anthocyanin found in purple corn. Several studies have documented its power, including one that compared C3G to 13 other anthocyanins using oxygen radical absorption capacity (ORAC) as its measure. The ORAC rating of C3C was 3.5 times that of Trolox, a synthetic and potent antioxidant analogue of vitamin E.

In a recent study, scientists from Ohio State University reported anthocyanins are potent antioxidants that may be protective against cancer. They compared the chemoprotective properties of anthocyanin extracts from purple corn, chokeberry, bilberry, purple carrot, grape, radish, and elderberry for their ability to inhibit colon cancer cell proliferation.

The researchers found that the amount of anthocyanin extract needed to reduce cancer cell growth by 50 percent varied among the plants tested. Extract derived from purple corn was the most potent, taking only 14 micrograms of C3G to reduce cancer cell growth by half. Extracts from chokeberry and bilberry were also fairly potent, though not as potent as the purple corn extract. Anthocyanins played a major role in the ability of the extracts to inhibit cancer, and they exerted an additive interaction with the other phenolics present.

In another recent study completed in Japan where most of the research on purple corn is being done, scientists examined the influence of dietary purple corn color (PCC) extracted from purple corn seeds on induced mammary cancer in genetically damaged rats. They found that PCC significantly inhibited the cancer growth, and also significantly inhibited the growth of human mammary cancer implanted in the rats. PCC and C3G inhibited cell viability and induced appropriate cell death in the mammary tumor cells. The researchers concluded that C3G could act as a chemopreventive and also as a chemotherapeutic agent for cancers involving mutations in ras genes. Mutations in ras stimulate cell division and proliferation, and facilitate development of various cancers. (Cancer Science, September, 2008.

Purple corn color may be effective in preventing liver cancer

Other scientists in Japan found that the serum of rats treated with PCC provided evidence of significant antioxidant power. Micro array analyses showed PCC to induce RNA expression. They concluded that PCC may be effective as a chemopreventative agent against liver pre-neoplastic lesion development.

Hypertension and cholesterol are lowered by blue corn

Japanese scientists also investigated the effects of continuous administration of color from purple corn, purple sweet potato, and red radish to spontaneously hypertensive rats. The animals were fed with diets containing 1% of purple corn, purple sweet potato or radish color. They found that the body weight and daily food intake of administered rats were not different from those in the control group, and the blood pressure and heart rate of the hypertensive rats that were administered each color decreased compared to the control group. These results suggest that anthocyanins have strong anti-hypertensive effects. (Journal of Nutritional Science and Vitaminology, February, 2007)

Other Japanese researchers performed an oral toxicity study of PCC with groups of rats fed the agent at dietary levels of 0%, 0.5%, 1.5%, and 5% for 90 days. No mortalities occurred during the treatment period, and there were no treatment-related changes in body weight, ophthalmology, hematology, organ weight, or histopathology. An unexpected finding was that on clinical chemistry analysis, total cholesterol, phospholipids, and triglycerides were significantly lowered in both female and male rats. The no-observed-adverse-effects-level (NOAEL) for PCC was judged to be 5% in the diet for both sexes. (Food Chemistry and Toxicology, February, 2008)

Anthocyanins from purple corn are stable when heated

Researchers in China evaluated the thermal stability of purple corn. Total anthocyanin content and total phenolic content were identified, and individual anthocyanins were determined. Seven main compounds were identified. The thermal stability of the corn was studied by differential scanning calorimetry. Thermodynamic analysis was completed, and relationships between the degree of conversion and time or temperature were examined. The researchers concluded that the evaluated purple corn hybrids are a natural source of anthocyanins that remain stable over a wide range of temperatures and time. (Journal of Agriculture and Food Chemistry, November 26, 2008)

This finding means that blue corn can be used in many ways that people now use yellow corn. It can be cooked or baked without losing its potency. Popped blue corn might become a favorite.

The husks and cobs may be the best part

In a study from South Korea, the goal was to develop high-anthocyanin corn to enhance economic efficiency of anthocyanin production. The researchers determined and compared anthocyanin content from different parts of purple corn in various breeding lines. Results revealed that purple corn produced the anthocyanin pigment throughout the plant. It was found in especially high levels in the husk and cob regions. Anthocyanin levels of husks ranged from 17.3% to 18.9% of dry weight, roughly 10 times more than found in the kernel. (Journal of Agriculture and Food Chemistry, December 10, 2009)

This means that the parts of the traditional corn plant that were thrown away have value if they come from purple corn plants. The higher levels of anthocyanins in the husks and cobs make there parts ideal for supplement manufacturers.

I have never seen any purple corn in Hong Kong. Hope it can be available soon.
荔枝角卓越迷你倉香港仔時昌迷你倉