This Will Save Millions of Wine Bottles 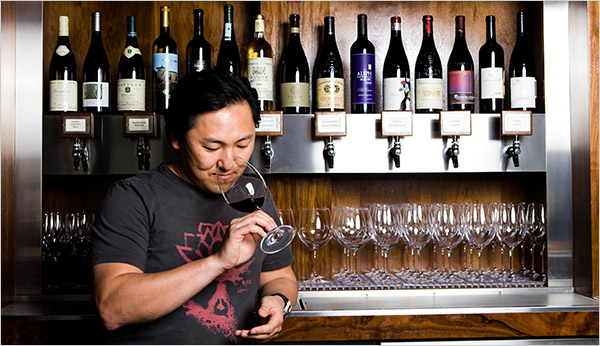 NO WASTE Sang Yoon has eight wines on tap at his Father’s Office restaurant in Culver City, Calif.

THE bartender pulls the handle and the liquid pours forth from keg to glass with the distinctive gushing sound that has launched a zillion thirsts. Ah, yes, that fresh draft flavor — nothing like wine on tap.

Wine? On tap? Is this another attack by the same philistines who insist on screw caps, stemless glasses and other means of depriving wine lovers of their pretensions?

On the contrary, wine, stored in kegs and served through a method similar to a draft-beer line, may be the glorious future of by-the-glass pours in bars and restaurants.

It’s just a trickle right now, but the keg and tap system has successfully taken hold in restaurants in Los Angeles and San Francisco, and in wine bars in the city of Napa, Calif.; in Atlanta; and in Traverse City, the heart of Michigan wine country. And it’s coming soon to New York City, to no less a place than Daniel Boulud’s downtown outpost, DBGB, tentatively scheduled to open on the Bowery in May.

“It’s the wave of the future,” said Colin Alevras, DBGB’s beverage manager, who will have 24 taps at his disposal, 22 for beer and one each for a house red and a house white. The number of wine lines may increase there, he said, if the public is receptive.

What makes wine on tap not merely good but brilliant? It’s not the tap, it’s the keg.

Taps themselves have been used for many years as part of complex preservation systems intended to protect open bottles against the demon slayer of wine, oxygen. Perhaps you’ve seen such a system, bottles in a refrigerated glass cabinet, taps on the outside, a Medusa’s tangle of hoses extending upward in an effort to rebuff the oxygen with inert gases like argon. Systems like these are an improvement over the half-empty bottle recorked behind the bar, but they are imperfect, complicated and expensive.

The bottles are a problem. Even with the best preservation system the wines don’t always stay perfectly fresh. A lot of wine is thrown away, or served in poor condition, resulting in a lesser experience at a greater price for consumers and a lot of waste for the restaurant.

“You have to calculate in your pricing the wine you didn’t sell, the wine you had to throw away,” said Sang Yoon, the chef and owner of two Father’s Office restaurants in the Los Angeles area, and a true believer in the keg and tap method. “The wine is 20 percent cheaper right off the bat.”

Mr. Yoon served wines by the glass the conventional way at his first Father’s Office in Santa Monica, where his fanatical pursuit of top-quality ingredients and superb craft beers, along with an autocratic style (“no substitutions, modifications, alterations or deletions,” the menu reads) turned his little bar into a cult restaurant. But he wanted something better for the wine when he opened his second restaurant, in Culver City.

“I can’t remember having had a positive wine-by-the-glass experience unless the bottle was freshly opened,” he said. “As an owner, you also come to realize how wasteful wine by the glass becomes. As a result your pricing has to reflect that waste, so most places serve cheap wine with big markups for glass pours, which equals bad value for consumers.”

Then it hit him. “Why can’t we just serve good wine out of a keg like we do with beer?” he said. In kegs, which keep out the air, wine could stay perfectly fresh for months, he reasoned. Mr. Yoon found a restaurant in Atlanta that was serving wine from modified beer kegs, and, with an energy borne of obsession, he set out to perfect the system.

He found a treasure-trove of five-gallon soda kegs, big enough to hold about 25 bottles of wine each, no longer used by the bottlers, who had turned to bag-in-box containers. He worked to persuade wineries to fill the stainless steel kegs for him. And he custom-designed coolers for the wine kegs, separate from the cooling system he used for the 36 beers he offers on tap.

“Whites are kept at 46 degrees, and reds 55 degrees,” he said. “Once the wines hit the glass, the temperature rises about two degrees, thus bringing the actual service temperature to 48 and 57 respectively. I did a lot of testing.”

Mr. Yoon now offers eight wines on tap, including wines from Brewer-Clifton, Melville, Stephen Ross and Flowers, and with the reusable kegs he estimates he saves having to dispose of 10,000 bottles and related packaging a year.

It was on a scouting trip to Los Angeles last year that Mr. Alevras of DBGB visited Father’s Office to look at Mr. Yoon’s beer system. He came away fascinated by wines in kegs.

“It’s beautiful in its simplicity,” he said. “Gas goes in as wine goes out.”

Gas? Well, of course. That’s how a beer keg works. Except beer systems generally use a high-pressure carbon dioxide system, which carbonates the beer. Wine simply needs a low-pressure system in which gas pushes the wine from keg to tap and occupies the empty space in the keg, preventing oxidation. Mr. Yoon uses nitrogen, which the restaurant produces itself with a reverse osmosis generator.

While Mr. Yoon may have improved the system, he by no means invented it. For centuries in the ancient wine-producing regions of the world, a barrel and a tap method was the low-tech way to dispense wines in countless bars and taverns. Even today, you see wine on tap frequently in Europe, even if it doesn’t have the sleek 21st-century perfectionism of Mr. Yoon’s system.

Europe was the inspiration for Craig and Anne Stoll, the owners of Delfina in San Francisco. In their new pizzeria, which opened in October, they serve vino alla spina, as wine on tap is called in Italy.

At Oxbow Wine Merchant, a retail shop and wine bar in Napa, Peter Granoff is going through two 15-gallon kegs of white wine a month.

“We can pour a very nice glass of wine, five ounces, for $4 or $5,” said Mr. Granoff, an owner. “There are no packaging costs, the kegs get used over and over. No corks, no capsules. I would guess the consumer savings is 25 or 30 percent, depending on the wine.”

Gillian Ballance, the wine director at the Carneros Inn in the Napa Valley, was intrigued enough by what she saw at Oxbow to put in a tap at Farm, one of the inn’s restaurants, about three months ago. She’s now serving verdelho from Scholium Project for $6 a glass.

Is wine by the keg a novelty? Or is this just the beginning of a trend that will benefit purveyors and consumers? It makes too much economic sense, I think, for it not to take hold.

But it won’t happen overnight. While the technology is not new or experimental, existing beer lines cannot simply be converted for wine. It’s far easier, restaurateurs say, to install wine lines to begin with, preferably during construction. “You can retrofit almost anything,” Mr. Granoff said, “but it gets really expensive.”

So far the public seems to be embracing wines on tap, although Mr. Granoff isn’t taking chances. He likes to offer customers a glass to taste, and tells them only after they try it how the wine was dispensed.

“Their jaws kind of drop,” he said. “You’ve gotten past their perception, by giving them the wine without telling them where it’s coming from.”