Gourmet Food is a Grand Slam!

I can't wait to visit the New stadiums here in New York. This article is really exciting for foodies and baseball fans.

Stadium Food: Not Nouvelle, Not Nedick’s, Chow for Now

A $5 hot dog was often the default meal at Shea Stadium and the old Yankee Stadium, since there were few better choices. But food is not an afterthought at their replacements.

Skip to next paragraph 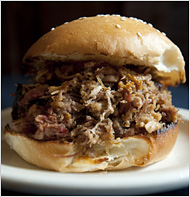 A branch of the Blue Smoke barbecue restaurant will serve pulled pork sandwiches ($9). 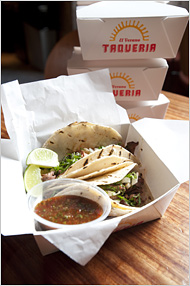 Even the bleacher creatures at the new Yankee Stadium will be able to get steak sandwiches from a premium butcher. And at Citi Field there will be lobster rolls and barbecue, with beer and wine flowing more freely.

Is that cheering we hear from the nosebleed seats?

Of course, those with plush seats closer to the action will be able to dine on dishes like heritage pork porchetta over kielbasa sauerkraut, and crab cake with a cauliflower and tomato relish from the $48 prix fixe menu at the terraced tables of Citi Field’s Acela Club. The restaurant overlooks left field, where the chef is Michael Sobelman, formerly of Tribeca Grill. It is one of several high-end restaurants in the new ballpark.

In Yankee Stadium’s high-priced sections, fans will have a chance occasionally to watch marquee chefs like Masaharu Morimoto and April Bloomfield, as well as Food Network personalities, serving their specialties at more than 15 cooking stations in several dining rooms. To pamper big spenders, food is included in the price of tickets to the club seats and suites at Yankee Stadium. This program, a sports arena trend, will not be offered at Citi Field, where top prices for seats are lower.

Both new stadiums have elite Delta Sky 360 Clubs, with the one at Citi Field run by Danny Meyer’s Union Square Hospitality Group.

But fans in the cheaper seats have not been forgotten.

At Citi Field, an open-air food court called Taste of the City, with a dozen concession windows, sprawls along the concourse behind left-center field. With expansive views, it is quite a change from Shea Stadium’s back of the hand for hungry fans, the tunnel-like corridors where they were forced to grab a bite.

Early in the season, at the Mexican stand, El Verano Taquería, Floyd Cardoz, the executive chef of Tabla in Manhattan, who said he is a “huge Mets fan,” expects to be on hand frequently, checking on his soft tacos, with pork carnitas, skirt steak or pumpkin seed and chicken mole ($7.25 each). He will also be serving Mexican-style corn on the cob dusted with cheese and mayo for $3.50.

The Union Square group, which runs the taquería, has also brought a branch of Blue Smoke, its barbecue restaurant, which will serve Kansas City ribs ($10), pulled pork sandwiches ($9) and chicken wings ($8). Shake Shack, the company’s popular hamburger ($5.75 to $8.75) and milkshake stand, will also be at the food court, along with Box Frites, with fries ($6.50 and $7.50) and a choice of five dips, including smoky bacon.

And those steak sandwiches ($15) at Yankee Stadium will be carved at a rotisserie cart on the main concourse, and at two Triple Play carts, from beef supplied by Lobel’s, the carriage trade butcher on Madison Avenue, which is also the meat purveyor for the restaurants serving the better seats.

Legends Hospitality Management, the company the Yankees formed with the Dallas Cowboys and Goldman Sachs to run food services, hopes food lines will be shorter. The number of concessions will be about the same, but they will have about 50 percent more registers, all accepting credit cards. Aramark, which runs the concessions at Citi Field, has increased the number of stands to 66 from the 50 at Shea. Legends has doubled the number of food service employees, including vendors who sell in the seats, to about 2,500, up from about 1,200, and at Citi Field the number has gone to 1,700 from 1,200 at Shea.

And more of what people will be waiting for will be freshly prepared. In the old Yankee Stadium, only 14 percent of the food carts and concessions could cook. But now about 70 percent of the food stands will be grilling, frying and baking, including places like Brother Jimmy’s barbecue, Johnny Rockets burgers and shakes, Latin Corner with pressed Cuban sandwiches, and Soy Kitchen, a Bronx purveyor of Asian food. At Citi Field, 23 stands will be cooking, up from 7 at Shea.

Most of the food stands on the concourses, which circle each stadium, and in other areas, have been set up so the field is visible.

Both stadiums also have market areas where prepared foods and even fresh produce can be purchased.

Easing ticket-price pain, some concession-stand prices are lower at Citi Field than they were at Shea: $5.75 for a regular hamburger, down from $7.50, and $3.75 for a knish, instead of $5.25. Yankees fans will be given no such relief.

Both teams have even paid attention to wine. Throughout Citi Field, there are wines by the glass from lists that Zachys Wine and Liquor, in Scarsdale, N.Y., has suggested. “For the first time, wine is available for those in general-admission seats,” said Andrew McMurray, the executive vice president of the store. A five-and-a-half-ounce pour costs $9.

And, after a nine-year drought, fans in Yankee Stadium’s bleachers will be able to buy beer, as well as wine, which is completely new.

Glatt kosher food is also available, from Ouri’s, a kosher caterer in Brooklyn, at various locations in Yankee Stadium, and from Kosher Sports of Englewood, N.J., at Citi Field.

As for those hot dogs, at Citi Field, stands will be selling Nathan’s skinless and natural casing dogs, as well as corn dogs on a stick, plus, from Shake Shack, a Chicago dog ($5.75), a New York City dog ($5) or a smoked chicken bratwurst ($6). Nathan’s skinless franks will be hawked for $4.75 in the seats, $5 at Yankee Stadium.

The Stadium will also have natural hot dogs and corn dogs, Hebrew National hot dogs, a glatt kosher hot dog and, for $3, a smaller frank. Many of them will be grilled.

Also, for Yankees fans who want a sit-down meal without springing for the expensive seats, there is the NYY Steak House above the Hard Rock Cafe, with a street entrance open all year.