Wines of Spain, Bierzo Wines in the New York Times 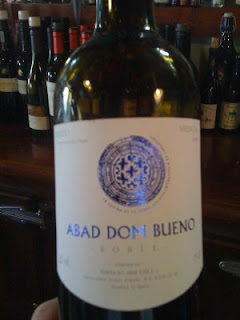 Once again Aroma Thyme Bistro has one of the top New York Times wine pick. Bodega del Abad Bierzo Dom Bueno 2005 is on our wine list. The added benefit to this wine is that is has no added sulfites. It contains only naturally occuring sulfites, which many foods like strawberries even have.

March 18, 2009
WINES OF THE TIMES
Ancient Spaniards for Modern Cellars

By ERIC ASIMOV
THREE years ago the wine panel reviewed reds from the Bierzo region of Spain for the first time. We were enchanted with the haunting, complex aromas of the mencía grape, which is used to such wonderful effect only in northwest Spain.

Since Bierzo has emerged to the rest of the world as a wine region only in the last 10 years or so, we thought it was worth checking in to see how things were evolving. Not to keep you in suspense, things in Bierzo are going quite well, with a few qualifications.

Before I elaborate on that answer, though, let me explain why I think the question is so fascinating.

Because of its relative isolation, and because its significant grape is so different, Bierzo offers an unusual opportunity to observe how an ancient wine region takes its place in the modern world of wine commerce.

As with any emerging region, Bierzo faces multiple pressures as it tries to interest the rest of the world in its wines and turn itself into a desirable brand. Does it take the historical traditions that make its wines distinctive and try to persuade the world to embrace something new? Does it carefully study what is already popular and try to modify its wines to appeal to those built-in desires? Or does it do a little of this and a little of that?

The answer, of course, is all of the above.

Tasting through 25 bottles of Bierzo, we found some wines that offer the mencía largely unadorned, in all its exotic fruit, wildflower and mineral glory. These wines tend to be light-bodied and refreshing. Others we found to have benefited from aging in oak barrels and other modern winemaking techniques, which gave the wines structure and intensity without tasting overtly oaky or compromising their Bierzo integrity. And yes, we did find some wines that seemed too far from home, having lost any sense of regional identity.

For the tasting, Florence Fabricant and I were joined by Ron Miller, general manager of Solera, a Spanish restaurant on the East Side of Manhattan, and by Lydia Tillman, wine director at Casa Mono near Gramercy Park.

One of the wines that seemed to play it down the middle was our No. 1 bottle, the 2004 Villa de Corullón from Descendientes de José Palacios, the producer that spearheaded the Bierzo revival. Clearly, this was an ambitious wine with great depth to it. It was dense and tight, yet with such expressive potential that I felt as if I could taste the iron in the earth beneath the old hillside vineyards from which the grapes come. It was also the most expensive wine in our tasting.

Certainly, this particular bottling seems to have evolved. Three years ago we gave the 2001 vintage of this wine a hesitant two and a half stars, recognizing its quality but finding it jammy and oaky. The winemakers thankfully seem to have pulled back a bit.

Our No. 2 bottle, the 2005 Dom Bueno from Bodega del Abad, had a similar iron-mineral quality along with pleasing fruit, yet it was just $14, among the cheapest bottles in the tasting. Needless to say, it was our best value.

The No. 3 wine, the 2006 Pucho from Herederos de Martínez Fuente, seemed to represent the essence of the mencía grape, with its lovely, exotic aromas that can’t help but pull you in.

By contrast, our No. 10 bottle, the 2004 Cepas Viejas from Dominio de Tares, had all the earmarks of a polished modern wine in the international style, with its flavors of vanilla and cherry cheesecake. Even so, the underlying floral and mineral aromas found a way to emerge.

We generally aim to taste 25 bottles in a sitting, but scouring the shops three years ago we were able to corral only 16 bottles of Bierzo, with one producer, Palacios, accounting for 5 of them. This time, we were able to find our full complement of 25 bottles. They came from 20 different producers, well up from the 9 who accounted for all the bottles last time. Clearly, more Bierzo wines are reaching this country.

But we encountered some of the commercial hiccups that can occur when a little-known wine region is in the process of introducing itself. These hiccups can interrupt what should be an orderly flow in the stores of one vintage after another.

While three years ago we tasted the 2003 Tilenus Pagos de Posada from Bodegas Estefania, this year we had the 2001 vintage of the same wine.

What does this mean? Well, because people generally need a reason to buy wines from a region they don’t know, it’s not uncommon to encounter older vintages of such wines that have been on the shelves for a while. This can be bad if dusty bottles sit in the heat and light, but if storage conditions are right, it can be a good opportunity to taste a wine with some aging.

We liked the wine well enough — it was delicious, in fact. I include it not to suggest that this particular vintage will be easy to find, but to give a sense of the unexpected bottles that may be out there in the marketplace.

Whether Bierzo ultimately succeeds in creating a niche for itself is anybody’s guess. It has plenty of competition, not least from the other emergent regions in Spain, like its neighbor, Ribeira Sacra, which also makes wines from the mencía grape. The economy will also make it difficult to sell the more expensive bottles. On the other hand, if distinctive wines are an advantage, Bierzo may have a good hand to play.

Some of the less expensive wines on our list might be especially attractive, like the Abad, the 2006 from Bodegas Peique, and the 2006 Pétalos from Palacios, which narrowly missed making the top 10.

It may be that, like me, you’ll develop a taste for Bierzo that won’t go away.

Closed at first, but with time in the glass lovely aromas of violets and herbs emerge. (Grapes of Spain, Lorton, Va.)