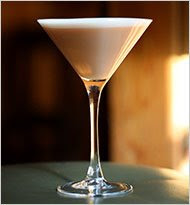 Nicole Bengiveno/The New York Times
CALL IT BRUNCH The idea was to create an Irish whiskey drink appealing to the cocktail crowd.

SHAKEN & STIRRED
Wear the Green but Don’t Drink It ﻿﻿
By JONATHAN MILES
YOU will be tempted, on Tuesday, to drink something green. Resist it.

I’m not referring, by the way, to the green-dyed light beer that will be flowing on St. Patrick’s Day like water from a broken fire hydrant. If you’re tempted by that, I won’t stop you: Erin go Bro, and godspeed.

No, what I’m talking about is the cocktail equivalents of green beer, all the “obligatory Midori and crème de menthe drinks,” as Anthony Malone, the Dublin-born general manager and bartender at Puck Fair, an Irish bar on Lafayette Street near Houston, put it. “All those awful green things,” he said, such as the Everybody’s Irish, a drink that calls for Irish whiskey, crème de menthe, Chartreuse and a green olive. Everybody’s Irish? Everybody’s gagging.

The obvious starting point, for a proper St. Patrick’s Day cocktail, is Irish whiskey. But that — Everybody’s Irish aside — is where it gets difficult. Ask a bartender for a classic Irish whiskey cocktail, and you’re likely to get a long, pained pause.

That’s because Irish whiskey has kept its distance from the cocktail set. Like its peatier cousin, Scotch, it tends to be a curmudgeonly loner, preferring the company of just ice and a bit of water. “I’m sure my father never drank a cocktail in his life,” said Colum Egan, the master distiller for Bushmills, the four-centuries-old whiskey producer from County Antrim, in Northern Ireland.

But Mr. Egan, who confesses to liking his Irish whiskey tempered with a fizz of ginger ale, is trying to change Irish whiskey’s introverted reputation, to appeal to the cocktail drinkers currently driving the spirits market.

Earlier this year, he issued a curious challenge to a select group of bartenders in New York, Chicago, Boston and San Francisco. He asked them to create cocktails based upon the traditional Irish breakfast — eggs, bacon, black and white pudding, and toast. And Bushmills, of course, though Mr. Egan hesitated to cite his product as a breakfast staple. “More like brunch,” he demurred.

Here in New York, Jim Meehan of PDT responded with a drink in which bacon-infused Bushmills is combined with maple syrup, orange and lemon juice and a whole egg.

Mr. Malone, at Puck Fair, took a simpler approach, combining Bushmills with cherry liqueur and orange juice, as in the Scotch-based Blood and Sand, along with a whole egg, “for that creamy consistency.” The cocktail will be available at Puck Fair on St. Patrick’s Day (“our biggest day of the year,” Mr. Malone said) and through the week.

Can Irish whiskey shake its lonesome rep and break into the gregarious cocktail scene? Bushmills main competitor, Jameson, is also auditioning for a larger role in cocktails, pitching a Jameson Manhattan for St. Patrick’s Day. “It’s a good, balanced whiskey, and perfect for those who don’t want the sweetness of bourbon or the smokiness of scotch,” Mr. Malone said. Just keep it away from the green stuff.

So Mr. Egan from Bushmills Irish whiskey put out an interesting cocktail challenge. I'm not quite sure, or I'm pretty sure actually that the whole bacon and egg theme would not be for me. But it would be interesting to try or see it done. The one bar that's mentioned, Puck fair, is one of my favorite beer bars in New York City. They always have at least 20 draft beers available at all times. Since they're known for their beer they do get the limited release goodies. So if you are a beer lover I would definitely recommend Puck Fair to your list of bars that you must visit.

At Aroma Thyme Bistro, Ellenville New York, we did stock up on the Bush Mills for St. Patrick's Day. But are big seller is going to be the American Kobe corned beef and cabbage.
Posted by Unknown at 6:56 AM