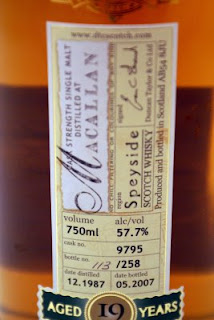 Aroma Thyme Bistro is proud to announce our first single malt Scotch dinner. This dinner has been long overdue. But since we have so many Scotches I’m sure we’ll do another dinner. Single malt scotch has been very popular at Aroma Thyme. In fact our single malt Scotch and whiskey collection tops 50 selections now.


The Bruichladdich distillery is located on the north shore of Lochindaal (Islay), near the town of Port Charlotte and directly opposite Bowmore. Bruichladdich was built in 1881 by the Harvey family, who kept it until 1929 when it was closed.

Invergordon Distillers acquired Bruichladdich in 1968 and expanded the number of stills from two to four in 1975, before selling it to JBB / Whyte & Mackay. However, they closed it in 1995.

It was bought in 2000 by a consortium of 25 shareholders operating under the name 'Bruichladdich Distillery Co. Ltd. Production resumed in May 2001. Although that new spirit couldn't legally be sold as 'whisky' for at least three years, the new owners also acquired a lot of maturing stocks that were laid down by Invergordon and JBB / Whyte & Mackay. These stocks were used to establish the brand as quickly as possible.

The Benriach distillery is located near Elgin in the 'Lossie' part of Speyside, just in between Linkwood and Longmorn. It was built in 1898 by John Duff, who had constructed the Longmorn distillery a year earlier. Unfortunately, financial problems forced him to sell both distilleries soon afterwards.

Benriach was purchased by the Longmorn Distillery Co Ltd. who promptly decided to close it again in 1900. After remaining silent for more than half a century, Benriach was eventually sold again and rebuilt by new owners; The Glenlivet Distilleries Ltd. in 1965. They sold Benriach on to Seagram in 1977, who went on to install a second set of stills (wash & spirit) in 1985. Chivas bought Benriach in 2001, but closed the distillery again in 2002, almost immediately after they acquired it - just like Longmorn Distillers had done more than a century earlier. It would almost seem like Benriach (meaning 'speckled mountain') doesn't inspire a lot of confidence in its owners... Fortunately, Benriach was reopened again in 2004 by yet another new owner. Scotsman Billy Walker (a former operations manager with Burn Stewart) and two South African partners (Geoff Bell and Wayne Kieswetter) purchased the Benriach distillery in 2004. They did a remarkable job and turned Benriach into one of the 'hottest' distilleries.

Why was Benriach closed so soon after it was built in 1898? John Duff, founder of Longmorn and Benriach (a.k.a. Longmorn #2) was one of many whisky entrepreneurs to suffer from the effects of 'The Pattison whisky Crisis'. During the late 19th century there was a massive whisky boom and during the 1890's no less than 33 new distilleries (21 in Speyside alone) were opened to meet the growing demand. It all came crashing down in 1899 when major players Pattison's Ltd. from Leith went into liquidation. Their bankruptcy caused the bubble to burst and infected the industry.

Speyside Distillery was built following one man's dream to have his own malt whisky distillery. George Christie a well known merchant chose the tranquil spot at Tromie Mills, three miles from Kingussie to build his dream. The disused barley mill and croft dating back to the 1700's had been run for many generations by the McGregor family, the final milling being done by Alex McGregor in 1965. George Christie commissioned Alex Fairlie a dry stane dyker to build the distillery. Alex single-handedly laid all the stonework over a period of nearly 20 years and the distillery started production on 3rd December 1990. The old mill and water wheel were retained and are still in working order.

The distillery takes its name from the original Speyside Distillery in Kingussie which started in 1895 and only produced until 1905 before being demolished in 1911.

The Balvenie distillery in Dufftown was built in 1892 by W. & J. Grant, owners of the Glenfiddich distillery nearby. More than a century later they are still 'sister stills', owned by the very same company that originally built them; William Grant & Sons.

When the distillery was built in 1892 it was outfitted with second hand still from Lagavulin and Glen Albyn. This might seem a bit odd at first, but the use of second hand stills from other distilleries that were demolished or refurbished is actually not that uncommon. These days Balvenie has no less than eight stills (4 wash stills and 4 spirit stills); two of them were added in 1965 and one in 1971

Balvenie 12yo 'DoubleWood' (40%, OB, Bottled +/- 2008) Nose: Whoah! Big, round and fruity. Not a lot of 'definition', but very pleasant indeed. Whiff of shoe polish? Taste: Solid and sweet with loads of floral notes in the centre. Old fashioned fruit sweets.
Some passion fruits. Touch of smoke in the finish.


The Glenlivet distillery bought by Chivas (Seagram) in 77. Sold to Pernod in 2001.

It began with a man named Gow, a supporter of Bonnie Prince Charlie. The last scion of the Stuart family to vie for the throne of England and Scotland. Later he became a man named George Smith and turned from illegal whisky distilling-- because all Highland production was illegal-- to legal whisky making and founded the Glenlivet. 1824, or thereabouts.
Smith was aided in this endeavor by his landlord the Duke of Richmond and Gordon (Smith’s son was named George Gordon Smith).

'Glenlivet' meant 'The long Valley' - because so many distilleries were located there. Until 1984, many distillers still put 'Glenlivet' behind their name on their labels. After a many legal battles in court, only the Glenlivet distillery is allowed to use the name THE Glenlivet

Glenlivet 18yo (43%, OB, LN10322, Bottled +/- 2003) Nose: Gentle, malty with a whiff of citrus. Other fruits as well. Sweet. Accessible. Grows more complex with time. Organics in the background. Very classy but fairly. Palate: Smooth, but it lacks substance. Hint of sherry in the sweet centre. Grows hot. Fairly gritty finish with a slightly bitter twang at the end. Clean and not too long. Score: 80 points . Solid craftsmanship. There's little else I can say about this one.

We are always happy to make vegetarian or vegan menu options. Please let us know of any special requirements when making your reservation. We always reserve the right to change or substitute menu items based on seasonal and/or delivery challenges.
Posted by Unknown at 2:35 PM

The wine dinner was spectacular last night, can't wait for next week and this great Scotch dinner.

The wine dinner was spectacular last night, can't wait for next week and this great Scotch dinner.