Splenda, We Don't Serve It & You Should Not Eat It! 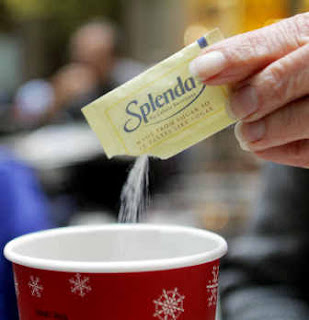 Splenda, We Don't Serve It & You Should Not Eat It! PERIOD

I just got this e-mail from from Dr. Mercola, he has a very informative daily e-mail.


James Turner, the chairman of the national consumer education group Citizens for Health, has expressed shock and outrage after reading a new report from scientists outlining the dangers of the artificial sweetener Splenda (sucralose).

In animals examined for the study, Splenda reduced the amount of good bacteria in the intestines by 50 percent, increased the pH level in the intestines, contributed to increases in body weight and affected P-glycoprotein (P-gp) levels in such a way that crucial health-related drugs could be rejected.

The P-gp effect could result in medications used in chemotherapy, AIDS treatment and treatments for heart conditions being shunted back into the intestines, rather than being absorbed by the body.

According to Turner, "The report makes it clear that the artificial sweetener Splenda and its key component sucralose pose a threat to the people who consume the product. Hundreds of consumers have complained to us about side effects from using Splenda and this study ... confirms that the chemicals in the little yellow package should carry a big red warning label."

Splenda is not natural; it is a chlorinated artificial sweetener. There have been no long-term human studies on the safety of Splenda; however, issues have been raised about Splenda in a new study from Duke University.

According to the study, Splenda “suppresses beneficial bacteria and directly affects the expression of the transporter P-gp and cytochrome P-450 isozymes that are known to interfere with the bioavailability of drugs and nutrients. Furthermore, these effects occur at Splenda doses that contain sucralose levels that are approved by the FDA for use in the food supply.

For more information on the Duke University study, click here.

Marcus Guiliano
Guru of Healthy Foods
Posted by Unknown at 7:58 AM