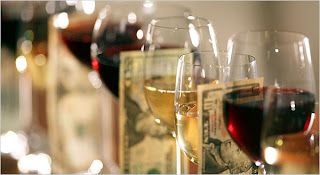 I love reading the New Times every Wednesday. It's the Dining & Wine Section that gets my attention. So I am posting the wine article "Italian Unknowns, From $10 to $20". I was just at a huge Italian Wine tasting two weeks ago in New York City and found tons of great value wines from small impoerters and small wineries. I love finding wine that are limited. It makes the customers experience at Aroma Thyme Bistro interesting. I know I can pick a wine for them that they have never had before, unless they have been here before.
In stock at Aroma Thyme:
Ocone Aglianico del Taburno 2004
Earth, minerals and musk — dark and delicious.

By ERIC ASIMOV
IF you are satisfied with a wine that is palatable and goes down easy, you will never go thirsty spending less than $10 on a bottle.

But for just a few dollars more, a world opens wide, revealing all sorts of distinctive and delicious wines that speak of culture and history rather than communicating mere commerce.

Few places offer a wider selection of singular wines in the $10 to $20 price range — the sweet spot for great wine values — than Italy.

From the Alpine hillsides of Alto Adige and the Valle d’Aosta to the languid Mediterranean climes of Sicily, Italy is awash in wines that will sometimes challenge and occasionally confound but will almost always reward the adventurous palate.

Those who have persuaded themselves that diversity is a thing of the past can find ample evidence in Italy that the wine world is becoming one globalized, homogenized vendor of generic taste-alike red and white wines. But to leap from observation to conclusion would be to ignore the myriad wonderful little-known bottles sitting in good wine shops around the world.

For example, consider a white wine that makes a beautiful aperitif, produced by a cooperative in the Valle d’Aosta, a region so close to France that French is the common tongue. It goes by the ungainly name Cave du Vin Blanc de Morgex et de La Salle, and the wine is light, dry and perfumed with floral aromas, made from a grape that is alternately called blanc de Morgex or prié blanc. The grapes grow in gorgeous vineyards planted at elevations higher than almost anywhere else in Europe, and are found practically nowhere else in the world. In my neighborhood, I found a bottle for $16.

From the other end of Italy, Sicily, comes Cerasuolo di Vittoria, a red wine of which I’ve become a huge fan. This wine blends the fresh liveliness of the frappato grape with the deeper, plusher flavors of the nero d’Avola for a combination that is bright and spicy. The best version of this wine that I’ve found, Pithos from Cos, runs around $40, but Valle dell’Acate’s 2005 Cerasuolo di Vittoria Classico, for around $16, is absolutely delicious.

While Italy is rife with wines awaiting discovery, it is also full of wines ready to be rediscovered. In the 1970s and ’80s, lambrusco became infamous in the United States as the fizzy semisweet soda pop of wines.

Genuine lambrusco, on the other hand, is the everyday wine of Emilia-Romagna. It can be sweet, yes — a good, balanced dolce lambrusco can be a marvelous thing with fruit. But more typical is a dry, fresh and frothy red, wonderfully refreshing but with an earthy tang that makes it irresistible with salumi, lasagna and hard Italian cheeses. Good brands like Vini, Villa di Carlo or Medici Ermete are almost always under $20. I found a bone-dry lambrusco from Cleto Chiarli that went beautifully with a baked ham.

What about Soave, for so long a standard-bearer for the banality of Italian whites? That’s so 1970s! Insipid Soaves may still be prevalent, but Soave Classico from a good producer is altogether different, dry and tangy, with a mineral and herbal presence that can actually be reminiscent of Chablis. Soaves from producers like Coffele, Prà and Monte Tondo are regularly in the $15 range.

And what about Valpolicella, Soave’s red neighbor in the Veneto and onetime partner in vapidity? Valpolicellas today are a far cry from the wishy-washy wines of yore. A good example from a serious small producer, like a 2007 Valpolicella Classico from Vaona, about $14, is a delicate, subtle wine with an intensity that can surprise.

Italian whites have come a long way since the days of the fish-shaped bottle. Wines from the ribolla gialla grape, grown in the Collio region of Friuli-Venezia Giulia, can be lively and electrifying. A 2007 ribolla gialla from Dorigo, around $18, had lovely aromas and lingering flavors of lime, minerals and herbs.

The Campania region in southern Italy is now a source for consistently good whites, like a 2007 from Ocone, made from the falanghina grape, which offered delicious smoky, citrus flavors.

And again, there are those exciting discoveries. I loved a 2007 Telusiano Falerio from Rio Maggio, a producer I’d never heard of from the Marches. This wine was full of floral and mineral aromas and went perfectly with tortellini dressed in olive oil, salt, pepper and oregano.

Be careful not to serve these Italian whites straight from the refrigerator. The cold simply masks all the wonderful aromas and flavors, so give them no more than a slight chilling.

Of course, Italy is far better known for its reds, but even a famous red can be a great value. For $17.99 I had an excellent Chianti Classico from Rodáno, light and graceful. A 2006 rosso di Montalcino from La Palazzetta, a younger sibling of brunello di Montalcino, was lovely in its purity and mineral earthiness.

I love aglianico, the leading red grape from Campania and Basilicata, and Ocone makes a wonderful aglianico del Taburno, a wine of deep, dark flavors, more earth, musk and tar than bright fruit but absolutely delicious. For a wine more redolent of cherry fruit, try a Montepulciano d’Abruzzo from a producer like Valle Reale, Ciavolich or Dino Illuminati, all $20 or less.

The Piedmont region is home to the noble and expensive Barolos and Barbarescos. Nonetheless, myriad inexpensive reds are still available. Of the everyday reds, I generally prefer the tart, raspy barberas, like a 2007 from Renato Ratti and a 2006 from Oddero, to the pleasingly bitter dolcettos.

Sometimes, though, nothing takes the place of nebbiolo, the grape of Barolo and Barbaresco. At a time when practically unknown nebbiolo wines from Valtellina generally cost $25 to $30, it’s astounding to me that Produttori del Barbaresco, a great cooperative, can produce a nebbiolo wine for $19. But yes, its 2006 Langhe nebbiolo, made from young vines or lesser grapes, is just $19. It doesn’t have the stuffing of a Barbaresco, but it’s all there in a most pleasant microcosm.

For dessert, perhaps a light and frothy moscato d’Asti? G. D. Vajra, a good Barolo producer, makes an exceptionally delicious, sweet and peachy version for about $19.

Italian wine buffs will easily cite omissions in my short survey of affordable bottles. But that’s the beauty of ancient wine cultures like Italy’s. A wine that nobody thought worth noting, simply because it had been satisfying only the locals for, oh, a thousand years or so, is tasted by an enterprising young importer. Suddenly bottles of this wine appear in stores in Los Angeles or Nashville or New York, and they are ignored because, well, because nobody’s ever heard of the wine.

It happens, thankfully, again and again. That, my friends, is real opportunity.

Balanced and compact with aromas of cherries and a touch of chocolate. (Vinifera Imports, Ronkonkoma, N.Y.)

Dry and crisp with aromas of flowers and minerals. (T. Edward Wines)

Graceful and pure with flavors of dried cherries and minerals. (Polaner Selections)

Delicate and subtle, with floral, berry and herb aromas and flavors. (Acid Inc. Selections, New York)
Posted by Marcus at 8:56 AM