The Microbrewery Behind ‘Hop Obama’ 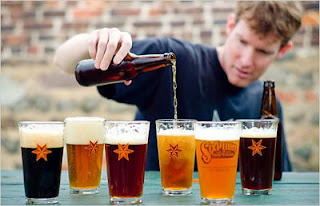 Robert Wright for The New York Times Shane C. Welch of Sixpoint Craft Ales.
We all know the saying "There is no such thing as bad publicity".

I have not tried this beer yet, and it looks like I won't. But Aroma Thyme Bistro did get two kegs of ObamaGang from Ommegang. And that was a great coffee rich stout that became a bistro favorite. But like the Hop Obama the ObamaGang was one time deal.

I don't know the laws about marketing beer with politicians, but most patrons loved the clever names. The name ObamaGang was enough to sell the beer.

By JAKE MOONEY
Robert Wright for The New York Times Shane C. Welch of Sixpoint Craft Ales.
With a pair of fourth-anniversary parties on consecutive Tuesdays, February was shaping up to be a busy month for Brooklyn’s Sixpoint Craft Ales even before the microbrewery’s brush with media notoriety last week.

But for one day, last Thursday, the level of activity at the Red Hook-based business got truly crazy. That morning, word trickled out from Sixpoint’s Facebook page that the federal government had ordered an end to production of Hop Obama, a beer named after Barack Obama last year when he was an underdog presidential candidate.

The story spread quickly, to neighborhood blogs, political sites and eventually the tabloids .

As it turned out, Sixpoint had stopped production of the beer before Election Day — weeks before the letter’s arrival — for unrelated logistical reasons.

When I checked in with the Sixpoint people on Tuesday, for the Dispatches feature in this weekend’s City section, they seemed a bit jarred by all the belated attention. By this time, though, life had mostly settled back down, and they were free to enjoy their party, at Williamsburg’s Barcade, and celebrate the fourth year of the business’s somewhat improbable existence.

Shane Welch, the Sixpoint founder and brewmaster, had been homebrewing for years, and had apprenticed at a microbrewery in Madison, Wisc., when he resolved to move to Brooklyn and start his own brewery. The choice of Brooklyn, as Mr. Welch told it Tuesday, had to do with his and his partner’s aspirations to do creative things with their beer and be around an artistic community.

“I thought, you couldn’t do that in, like, Wichita, Kansas,” he said.

Brooklyn was not easy either: “We were hemmhoraging money,” Mr. Welch, now 29, said.

Parties at local bars, he said, would draw one or two people. Over time, though, the brewery’s beers began to catch on among connoisseurs known affectionately as “beer geeks” — people who, faced with a choice, would prefer something called Diesel Stout or Emasculator over Bud Light.

One key to this popularity, Mr. Welch said, is that Sixpoint’s beer is not bottled, but sold only from kegs — or in stores like Bierkraft, in Park Slope, which will fill a 64-oz bottle from their own keg. This, he said, ensures that all of the brewery’s products are consumed in social situations. It is also, not insignificantly, cheaper for the brewery than bottling and packaging the beer.

None of this put Sixpoint, sales-wise, into the same league as Brooklyn Brewery, the reigning king of beer in the borough — let alone bygone giants like Schaefer or Rheingold that once made Brooklyn a hub of beer-making. Still, the beer geeks were happy, and this was the environment that Hop Obama was born into. The Obama connection, to the Sixpoint people, seemed natural.

“Our fans were his fans,” Sixpoint spokesman Jeff Gorlechen said. “They liked our beer already. It’s not like nobody was buying our beer.”

Paul Kermizian, the co-owner of Barcade, said Sixpoint beers are always good sellers at his bar, which specializes in American craft beers and vintage video games. (“We get beer geeks and we get video game geeks,” he said. “Surprisingly, there’s a lot of crossover.”) But Mr. Kermizian, who produced and directed the documentary ”American Beer,” said that Hop Obama was a hot commodity from the beginning.

“We did have it, before the craze,” he said. But now all the kegs were gone, he said, adding, a little ruefully, “I wish we had kept one.”

As consolation for Sixpoint partisans at the party, the bar did have 17 other beers from the brewery on tap.

Mr. Gorlechen, who was drinking the brewery’s carob porter after a long struggle to get a bartender’s attention amid the hundreds of partygoers, said the beer formerly known as Hop Obama will likely be back under a new name. In fact, he said, “We have a name. But I don’t want to tell you.”

Whatever the name is, it will have to gain the approval of the U.S. Treasury Department’s Alcohol and Tobacco Tax and Trade Bureau — the same agency that rejected Hop Obama.

Actually, agency spokesman Art Resnick said, it approved the name in February 2008, in an apparent oversight that was discovered, and reversed, in a review after Mr. Obama was elected president.

“We handle like 130,000 of these on a yearly basis,” Mr. Resnick said, “so it’s not unusual that one gets out on occasion that shouldn’t.”

The rule that applies in the Hop Obama case, he said, holds that no alcoholic beverage can be named after a public figure without a letter from that person granting permission to use the name. Its aim is to keep producers from improperly implying that a well-known person has endorsed a drink, or was involved in making it.

Interestingly, Mr. Resnick could not think of such a rule applying to people who aren’t public figures. In other words, in a purely hypothetical situation, could a brewer pick a random, catchy name out of the phone book, and name a beer with it?

“It is a hypothetical,” Mr. Resnick said. “And when we renewed that label we would have to take a look at it on a case by case basis.”

Such a scenario does, admittedly, sound improbable. Still, Mr. Resnick said, “We have a million and a half to two million labels on record in the system, so it’s hard to say that it has never happened.”

There is a long list of prohibited practices governing malt beverages like beer, and there are others for wines and distilled spirits. One constant, Mr. Resnick said, is that the rules are constantly being tested.

“People are always pressing the line and stretching the envelope, trying to get things approved one way or another,” he said.
Posted by Unknown at 6:14 AM

On January 16th I asked Shane: "With the crackdown on use of the incoming President's name (i.e. Obamagang), how were you able to call your beer Hop Obama?" He replied: "good question!"

It turns out that the Feds asked him to never make the beer again and he played it into a P.R. story.

Nice idea until the feds cracked down on that which only resulted in more P.R. Nice job done by Shane.