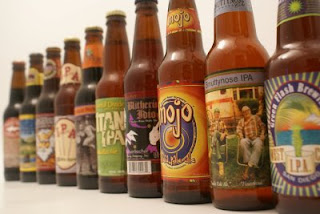 I have seen a growth in craft beer drinkers at Aroma Thyme Bistro in Ellenville over the last five years. And our beer list has grown to accommodate craft beer lovers. Our first year we offered around 4o different beers. The response was great. After seeing what other restaurants were doing all over the country we decided expand the list. I was amazed that nice restaurants such as Cafe D'Alsace in NYC, part of the Tour de France Group, had great wine and great beer ist. In fact they even had a beer sommelier on staff. I thought that was an awesome idea.

Craft Brewer Sales Continue To Soar Past Other Segments

Boulder, CO – Thursday, February 28, 2008 – In what has become a true American success story, the craft beer market again grew by double digits in 2007, leading all other segments in the beer category. The Brewers Association reports estimated sales by independent craft brewers up 12 percent by volume and 16 percent in dollars for 2007. Craft brewers' share of the beer category is 3.8 percent of production and 5.9 percent of retail sales.

“Since 2004, dollar sales by craft brewers have increased 58 percent,” said Paul Gatza, Director of the Brewers Association. “The strength of this correlates with the American trend of buying local products and a preference for more flavorful foods and beers.”

For more statistics visit the updated 2007 Craft Beer Industry Statistics Web page. A more extensive analysis will be released April 17 during the Craft Brewers Conference in San Diego, California. The Association's full 2007 industry analysis, which shows regional trends and sales by individual brewery, is published in the May/June issue of The New Brewer.

1. The definition of a craft brewer as stated by the Brewers Association: An American craft brewer is small, independent, and traditional. Small: Annual production of beer less than 2 million barrels. Beer production is attributed to a brewer according to the rules of alternating proprietorships. Flavored malt beverages are not considered beer for purposes of this definition. Independent: Less than 25% of the craft brewery is owned or controlled (or equivalent economic interest) by an alcoholic beverage industry member who is not themselves a craft brewer. Traditional: A brewer who has either an all malt flagship (the beer which represents the greatest volume among that brewers brands) or has at least 50% of its volume in either all malt beers or in beers which use adjuncts to enhance rather than lighten flavor.