Wild Alaskan Salmon, It's The Only Salmon We Serve! 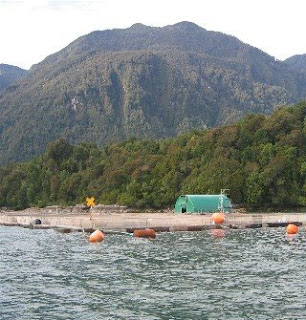 If you know Aroma Thyme then you know that we only serve wild Alaskan Salmon. The following article is another case for wild salmon.

If anyone is still in doubt that farming salmon in open net-pens is a harmful and unhealthy business, here's some news that confirms -- yet again -- these types of systems simply cannot control the spread of disease.

Add Shetland, Scotland to the list of places that have and are struggling with infectious salmon anaemia (ISA), a highly infectious and deadly disease that affects salmon. The disease was reported this month on a farm and government scientists are flying in to attempt to contain and assess the damage.

Chile has been making headlines since fall 2007, when the government first reported outbreaks of ISA in their dense salmon farming territory. The Chilean industry has been devastated by millions in financial losses, the slaughter of thousands of salmon, and thousands of job losses.

Recently, the Chilean government admitted defeat in trying to control this disease and has informed the Aquatic Animals Commission that the disease is 'unlikely to be contained and is now considered to be endemic' (Seafood International, Dec 08.) That's a scary prognosis for the country's ecosystem and workforce.

And that's very troubling news for us here in BC, where the industry is fighting to expand. Although BC has not experienced ISA yet, outbreaks of other infectious diseases do occur.

"Even without expansion, stocking levels have already made BC a 'sitting duck' for viral epidemics" warns Neil Frazer, Professor at the Department of Geology and Geophysics at the University of Hawaii. Closed containment systems are the only way to adequately control the risks of disease. Frazer agrees: "I believe that the costs of disease control will eventually force salmon farmers out of the ocean and into closed containment facilities. Whether BC will have any wild salmon left when that happens, is the important question, and I am not optimistic about the answer."

Photo: Salmon farm in Palena, Chile / Credit: Dentren
Posted by Marcus at 11:45 AM