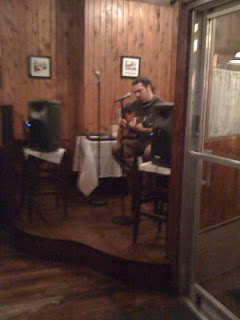 The voice and guitar of Brad Commeau
Performances by guitarist Freddy Johnson
Aroma Thyme Bistro staffer Stefany Ruiz doing Jason Mraz's "I'm Yours" and Jewel's "Save Your Souls"
Elizabeth Sullivan and Natasha Althouse teaming on Sullivan's original songs "Another Day" and "This Time"
The singing of Russ Damsky
and
Members of the audience participating in a round of "Match Game" hosted by Lorie Kellogg.

You can here the best of that night online at:
http://www.prx.org/pieces/23037

More on Joe Bevilacqua can be found at: www.joebev.com.
Posted by Unknown at 11:03 AM