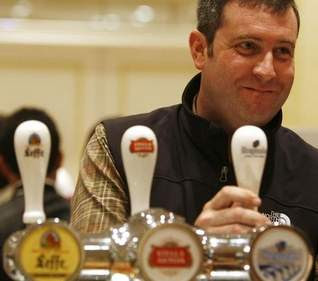 Johnny Nicholas with Anheuser Busch serves up some Hoegaarden yesterday during the two-day Greater New York Beer & Food Festival at the DoubleTree Hotel in Tarrytown. The festival features more than 150 beers from around the world alongside signature dish sampling from dozens of the region's finest restaurants. (Kim Walker/The Journal News)
Beer & Food Festival taps into sud lovers

Craft beer sales are growing and growing. Everyday I read a new e-mail that the craft beer segment of the market is on the rise. Craft beers are now in the spotlight just like wine & single malt Scotch.
Aroma Thyme Bistro offers over 150 craft beers on their menu. Marcus Guiliano, chef/owner, says "beer lovers are as just as sophisticated as wine geeks. And we have plenty of beers to keep them happy."

TARRYTOWN - More than the menu changed at the annual fall festival of food and drink that opened yesterday at the Doubletree Hotel.

Sponsors took wine off the table and replaced it with beer - about 200 brands in bottles and on tap, offered by 86 vendors at 40 tables - a switch that brought in a much younger and more casual crowd than had come to the earlier festivals, when the food was served with reds and whites.

Scott Honan, a husky 22-year-old construction worker, took the train in from New Paltz with four friends, adding the event to the circuit of beer festivals they began last spring with the TAP NY festival at Hunter Mountain in upstate Tannersville.

"We're trying all the beer from the region and the food is all-you-can-eat," said Honan, who seemed unhindered by the cast on his right hand, which he injured in a construction accident, leaving him just two fingers and a thumb to hold a glass. "It's a nice package."

The annual Wine & Food Festival hasn't been canceled, only moved to May 16 and 17. Sponsors, including The Journal News, added the beer festival to tap into the growing interest in the drink that has accompanied the explosive number of micro and craft breweries nationwide and in the region, according to Stuart Racey, the event's executive producer.

"Young people are getting more into beers these days," said Scott Vaccaro, the 30-year-old owner of Captain Lawrence Brewing Co. in Pleasantville. "Fifteen years ago, there were not so many beers to choose from, and everybody drank the same flavorless yellow water."

Not yesterday when there wasn't a Bud or a Miller to be found at any of the 40 beer tables. This was not your father's beer festival.

Leading the transition to the craft and microbrews are distributors like World Class Beverages, a division of Manhattan Beer Distributors, whose $575 million in annual revenues make it the nation's third largest distributor. After three hours yesterday, David Krebs, a sales supervisor for the company, said he and his colleagues had poured about 42 cases of the seven "high-end imports" they were showcasing. He said he was at the festival to improve "general beer knowledge" in the region.

"They might not have heard of a lot of these beers," Krebs said. "For example, this beer's from Utah. We just took it on a month ago."

Besides the Utah beer, called Solstice (a Kolsh-style beer that imitates one brewed in Cologne, Germany), the company had beers from New Jersey, Pennsylvania and Michigan.

Brenda Nevlen, a human resources manager who came from Nanuet with her boyfriend, Mike Kiely, sipped a glass of Euphoria, one of the Pennsylvania brews, known for its fruit and spice.

"It's actually really good," she said. "I kinda like the fruit-and-spice thing in my beers. Kinda weird, though."

There was more then beer itself to be had yesterday. Beerheads. com sold $17 T-shirts with sudsy slogans from some of history's most famous beer lovers, including Oscar Wilde ("Work is the curse of the drinking class") and Benjamin Franklin ("Beer is living proof that God loves us and wants to see us happy"). Even beer Web sites, including tavernator.com, were on hand.

Yesterday's festival drew about 1,000 people. It continues today. Tickets are $70.

Oh, yeah. There was food, too.