Ellenville, What to do in Ellenville? 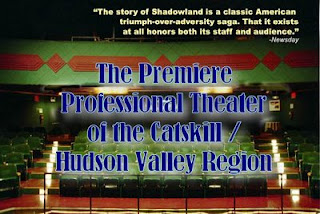 Aroma Thyme is open late after every performance, and we have live Jazz on Thursday & live Music every Saturday. Our kitchen is open until midnight.

By MARCUS KALIPOLITES
For the Times Herald-Record
August 21, 2008
ELLENVILLE — It's tough enough singing an operatic aria, but when you have had success in musical theater as well as opera, and your newly acquired role calls for singing out of tune, now, that's a challenge.

This was the dilemma facing Jacqueline Kroschell for the current Shadowland production of Peter Quilter's "Glorious," a very funny play in which she assumes the character of Florence Foster Jenkins (1868-1944). Known as the "first lady of the sliding scale," Jenkins was a wealthy widow who "wowed" her audiences with bad singing, including a 1944 full-house concert at Carnegie Hall.

But despite risk, Kroschell, in Friday night's opener in Ellenville, showed the way of real troupers. Flamboyant of personality, overflowing with energy, confident of success and persuasive in holding on to enablers, her effusive and charming character was commanding. From the opening scene of interviewing an accompanist to denying critics access to her performances to "singing" at Melotone Studios, Jenkins is in complete control of everything but the right notes. She even brags that if the Met would ask her to sing the title role of "Tosca," her performance would wipe out a year's worth of debt.

If you go ...
What: "Glorious" by Peter Quilter
Where: Shadowland Theatre, 157 Canal St., Ellenville
When: 8 p.m. Thurs.-Sat., 2 p.m. Sun., through Sept. 7
Tickets: $21-$26
Call: 647-5511
Not fully convinced, though persuaded to join her team, is pianist Cosme McMoon. He's played by a bewildered Christopher Daftsios, who grimaces on first hearing the self-proclaimed diva. But with labored willingness and growing admiration on the part of his character, Daftsios moves from doubt to feigned approval even as he "accompanies" her on the grand piano.

If McMoon's acceptance of Jenkins' potential takes time to mature, the crusade of support led by Dorothy (CC Loveheart) sparkles with the enthusiasm of a college cheerleader. With freakish laugh and flaky behavior, the quirky woman beams the exhilaration of a devoted fan even as she insists, "You haven't heard anything like it," notwithstanding that reality turns her comment on its head. But beyond glowing support for Jenkins, Loveheart's character also turns somber at the funeral of her dog, wishing that just once more she could entice him to retrieve a stick.

Not so accepting of the dog is Maria, Jenkins' cook and housemaid who, not only fetches water for the dog but also spouts exasperation in double-time Spanish at the weird goings-on. Laura Carbonell's Maria manages as well to fend off St. Clair Byfield's advances.

In the role of Jenkins' boyfriend, David Lenthall cuts a dignified figure who flashes unwielding support for his patron.

Support, but of a different kind, finds a rampaging Mrs. Johnson demanding by way of a petition that Jenkins stop killing music. As the feisty head of a music lovers group, Cynthia Topps confronts the would-be opera star with such fury that the verbal assault turns violent and physical.

With a frothy script and resourceful actors, this Brendan Burke-directed show is sure to please on the comedic, if not musical, level.
Posted by Unknown at 10:37 AM