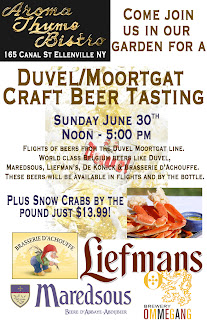 Details: Flights  and bottles of Liefmans, Maredsous, Ommegang, Brasserie D'Achouffe & Duvel.
Plus Snow Crab Legs are just $13.99 a lb plus our full menu is available.

About Duvel Brewery:
Moortgat brewery was founded in 1871 by Jan-Leonard Moortgat, who was descended from a family of brewers that lived in Steenhuffel, Belgium. In the 1950s, the third generation of Moortgats took control of the brewery.

Aroma Thyme has been the leader of the craft beer restaurants in the Hudson Valley. Aroma Thyme opened in 2003 with a firm dedication to true craft beer. “Since day one I have gone out of my way for great independent owned craft beer”, says Chef/Owner Marcus Guiliano.  The beer list has grown to over 250 beers without the big brands that fill most restaurants lists. But it’s not only beer at Aroma Thyme, it’s all about having one of the best stocked bars with independent producers. The Bistro has an award-winning wine list from Wine Spectator Magazine. Aroma Thyme is Three Star certified green by The Green Restaurant Association.

Chef Guiliano has been an advocate for over 13 years on healthy, sustainable, local & real food. Zagat says “Stealth Health”. He found his mission in cooking when he reversed a handful of medical conditions including 28 years of asthma. For more information visit www.chefonamission.com.www.aromathymebistro.com.