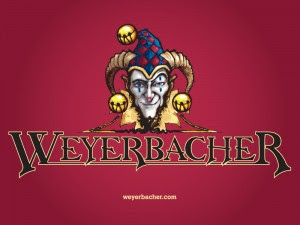 Weyerbacher Brewing Company is a microbrewery in Easton, Pennsylvania, United States, founded in 1995 by Dan and Sue Weirback. The brewery is well known for its "huge taste" beers. Most of their brews are high in alcohol, with QUAD clocking in at 11.8% alcohol by volume, and a one-off 10th anniversary ale called Decadence brewed to 13% alcohol by volume. Hops Infusion is one of the bitterest examples of the IPA style. Weyerbacher is also a pioneer of aging beer in wooden barrels previously used for aging bourbon. This process was used to transform Old Heathen into Heresy, Blithering Idiot into Insanity, Merry Monks into Prophecy, and QUAD into Blasphemy. These four styles (imperial stout, barleywine, trippel, and quadrupel) are all very high-alcohol brews with complex flavor profiles; the barrel-aging lends additional oak and whiskey flavors. The results have been widely praised by fans of huge beers, though persons accustomed to more mainstream beer may find them an acquired taste.
In September 2008, Weyerbacher released a limited run of a seasonal India pale ale, marketed as Harvest Ale (6.2% ABV),that featured a first-year crop of freshly picked, Cascade and Nugget hops grown by the Weirbacks on their farm. The hops were used for flavoring, not to impart the signature bitterness in the beer.
About Aroma Thyme
Aroma Thyme is known for their "stealth health"(Zagat). The Bistro has an award-winning wine list from Wine Spectator Magazine and over 200 beers. Aroma Thyme is certified green by The Green Restaurant Association. Marcus Guiliano is the chef & owner of Aroma Thyme Bistro located in the bountiful Hudson Valley of New York. Chef Guiliano has been an advocate for over 10 years on healthy, sustainable, local & real food. He found his mission in cooking when he reversed a handful of medical conditions including 28 years of asthma. For more information visitwww.chefonamission.com. www.aromathymebistro.com.
Posted by Marcus at 12:44 PM