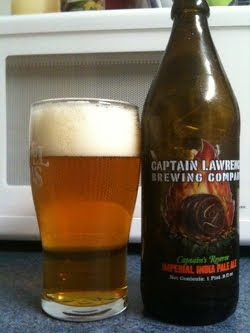 Meet Owner and Brewer Scott Vaccaro at Aroma Thyme for a 5-course beer dinner.  Scott will be on hand to explain all about Captain Lawrence Brewery.  Find why they are one of the best NY state breweries.


Aroma Thyme is know for their "stealth health"(Zagat). The Bistro has an award-winning wine list from Wine Spectator Magazine and over 200 beers. Aroma Thyme is certified green by The Green Restaurant Association. Marcus Guiliano is the chef & owner of Aroma Thyme Bistro located in the bountiful Hudson Valley of New York. Chef Guiliano has been an advocate for over 10 years on healthy, sustainable, local & real food. He found his mission in cooking when he reversed over a handful of medical conditions including 28 years of asthma. For more information visit http://www.chefonamission.com.

Captain Lawrence Brewing Company is an award-winning craft brewery located in Pleasantville, NY. The brewery is owned and run by head brewer Scott Vaccaro. Vaccaro, a homebrewer since 1995, trained in brewing science at UC Davis. He interned at Adnams Brewery, in the U.K. Before founding Captain Lawrence in 2005, he worked at Sierra Nevada and Danbury, CT's short-lived Colorado Brewery.Many of Captain Lawrence's offerings are strongly influenced by traditional Belgian styles of beer, although often with an American twist. Barrel-aging and beers with sourness or flavors contributed by wild yeasts, such as Brettanomyces, and bacteria have also become part of their repertoire.

The brewery takes its name from Captain Lawrence Drive in South Salem, NY - the road on which Vaccaro's childhood home is located. The street is named after Samuel Lawrence (1733-1796) who was a Captain in the Westchester County Militia, 3rd Regiment during the American Revolution.
Posted by Marcus at 2:03 PM