All about health at Aroma Thyme--By Kelly Kingman

All about health at Aroma Thyme 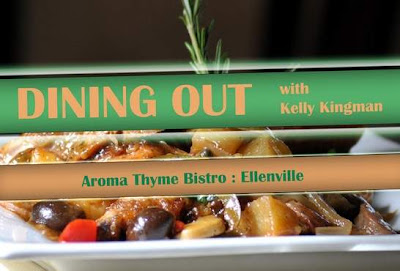 Walking into Aroma Thyme Bistro, we were immediately and graciously greeted by a cheerful server. She installed us at a table in the cozy, publike dining area. A long wooden bar rested by one wall, and wood paneling and deep booths ran along the opposite wall. The atmosphere was comfortable and casual, like a familiar neighborhood eatery but with a more exotic menu.

The appetizer selection included wheat grass juice ($5) and edamame ($5), as well as wine-braised mussels ($7) and Buffalo chicken wings ($8). Burgers are from grass-fed cattle, chicken is organic and bacon is nitrate-free. It's a restaurant certified by the Green Restaurant Association for its commitment to reducing environmental impact — from water usage to takeout containers.

Our server attempted to answer our questions about the ionized water that Aroma Thyme offers. She stumbled a bit over the explanation that ionized water is more alkaline, and couldn't really identify the supposed benefits. The claim is that ionized water acts as an antioxidant in the body — and it's widely debated. It's made in-house and tastes simply like distilled water. We were unable to detect any immediate effects.

We were given a binder full of specials, wine lists and event announcements that was a bit clumsy to pass back and forth. While we nibbled on slices of a rustic wheat loaf and a lemony white bean dip infused with rosemary and thyme, I ordered a Captain Lawrence Liquid Gold ($6), a sweet Belgian-style ale. We sampled the pungent cumin pappadums ($5) with a cilantro pesto dipping sauce and Australian Kobe cocktail franks ($10) with a roasted garlic and horseradish Dijon mustard. The franks were perfect bar food, though they were so numerous that they would be perfect for a larger group, maybe after consuming a few beers.

I selected an entree from the lineup of daily specials, passing up the 56-ounce grilled "long bone" cowboy steak ($97) of locally pastured beef we saw being passed to a nearby table. The grilled pork steak ($26), while not locally sourced, was humanely raised. It was seasoned with smoked black pepper and accompanied by garlic mashed potatoes and sauteed kale from Aroma Thyme's own garden.

The steak itself was a hair's breadth away from overdone, not dry but less juicy than I'd like, and underseasoned. The solution was to add a bit of the kale or potatoes to the forkful — both were delightfully garlicky and buttery. The potatoes had a pleasant, toothsome texture, almost like they were fried before mashing, and were downright addictive.

My friend enjoyed the chicken and bacon pizza ($11.99) on an ultra thin whole wheat crust. Gluten-free crusts were also available. It was a lively medley of flavors — mozzarella, cheddar, red onion and scallions were also among the toppings. A traditional tomato sauce might have added some welcome tartness. The combination of chicken, bacon and scallions was satisfyingly reminiscent of a baked potato. Our server was quite attentive and checked in frequently to see how we were enjoying our meal.

We finished with two desserts: the ice cream flavor of the day ($5) and the dark chocolate fudge torte ($8). It was a tough call to pass up the wild Maine blueberry crisp ($7). The ice cream consisted of Ben & Jerry's vanilla mashed with that day's featured additions, in this instance peanut butter and chunks of house-made brownies. It was adequate, but the peanut butter overwhelmed every other flavor.

I enjoyed a cup of dark, almost chocolatey coffee with the torte, which surprisingly was all raw: raw cocoa, raw coconut butter and raw agave. It was intensely rich, with an aromatic coconut taste underneath the dark, silky chocolate. It was more like eating ganache than a torte.

Even more surprising was a secret our server let us in on: The recipe included "green stuff," as she called it — purees of spinach and broccoli.

It stands to reason that at a place with such a commitment to the health of its patrons and the planet as Aroma Thyme Bistro, even our decadent dessert was good for us on some level.