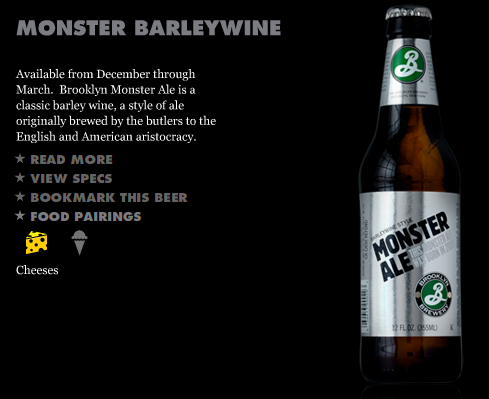 
We have been long fans of Brooklyn Brewery. When we opened Aroma Thyme back in 2003 we started buying extra Chocolate Stout and Monster Ale. Extra might be an under statement. See both of these beers have a vintage date on them. That means it has the year that it was made. This was actually the first time I was introduced into drinking older or aged beer. Somebody had tasted me on a Chocolate Stout that was over a year old, and it was fantastic. It was at that point on I decided to buy extra cases of both beers every year. These extra cases keep stacking up in the wine cellar. Keep in mind that you can always buy these beers on our list. After drinking a few of the past vintages this winter we decided it’s time to officially do an event. Join us Sunday, March 27 for a vertical tasting of the Brooklyn Monster Ale.  You will get to taste four past vintages for $15. That’s right for $15 you will be drinking some of the best barley wine that has been very carefully aged. This will be an incredible event to contrast and compare how beer can actually age and improve. And keep in mind that most beer is not designed to be aged. But these full-bodied high alcohol beers go through an incredible transformation.