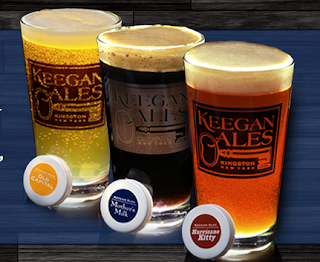 Want to drink some great local beer and have lunch catered by the Hudson Valley's original Certified Green© Restaurant.  Aroma Thyme and Keegan Ales have have planned an awesome brewery tasting, tour and lunch on Sunday January 16th, 2011.

It all starts at 12 noon at Keegan Ales on James St in Kingston NY.  Tommy Keegan will host a tour and tasting of his award winning beers.  Then enjoy lunch from Aroma Thyme Bistro.

About Keegan Ales:
Keegan Ales was founded in early 2003 when Tommy Keegan learned about an empty building in Kingston that nobody would buy because there was a defunct brewery stuck in it! (Although the building was built in the early 1800′s, the building was most recently home to the Woodstock Brewing Company.)
After months of cleaning and rebuilding, Keegan Ales brewed its first batch of beers on August 1, 2003(Tommy’s mom’s birthday) and set out hand-selling beer to local bars and restaurants early September. The first kegs of Old Capital, Hurricane Kitty and Mother’s Milk went to competition at Hunter Mountain that month. Mother’s Milk took home a gold medal and Old Capital was honored with People’s Choice: Best of Show.
After getting the brewery up and running selling draft beer, the crew at Keegan Ales turned their attention to the defunct bottling line. It had been left broken and literally in hundreds of pieces. It took months of pounding, tinkering and countless scratching of heads, but by the summer of 2004, Keegan Ales was available in 12 ounce bottles!
Keegan Ales has gone on to win many more awards and recognitions, including Best Brewery in The Hudson Valley (2009), Best Brewery in New York State (2009) and Best Craft-Brewed Beer in New York State (2009).
Early in 2010, The New York Times declared Mother’s Milk one of the top ten stouts in North America and Keegan Ales has also been awarded 2010 Small Business of the Year by The Ulster Chamber of Commerce and The Ulster County Development Corporation.

About Aroma Thyme:
Aroma Thyme founded in 2003 was the Hudson Valley's first Certified Green© Restaurant.  Located in Ellenville, Aroma Thyme offers local, organic, healthy gourmet & sustainable cuisine in an upscale setting.   The bistro proudly stocks over 150 beers, 200 wines and fine spirits from around the world.  Aroma Thyme is also one of the top rated Zagat restaurants in the Hudson Valley.