Are Kids getting Healthier? 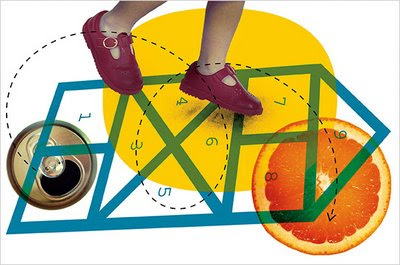 This is an interesting article on how kids eating habits are getting better. I know, by having two kids, that most kids eat junk food. And in most cases this food is approved by their parents. But it's not entirely the parents fault. Food companies have a neat way of making us think foods are healthier than they really are. They use the front of the box to post things like 100% RDA of vitamin C, contains whole grains or 100% RDA of some mineral. When in fact these foods are loaded with white sugar, white flour, trans fats, high fructose corn syrup and usually some funky preservatives.

I actually threaten my kids with a trip to McDonald's. My kids have never at McDonald's, Burger King, KFC, Wendy's or any other fast food establishments. So my kids have no idea what's behind the Golden Arches. They do know it is loaded with food that we do not eat.

Having healthy kids begins at home. My wife and I have spent the last nine years making sure that our children are eating nutritionally dense, raw whenever possible, organic and whole foods. have one conversation with my kids and they will teach most adults a thing or two about nutrition.

Where do parents start? believe it or not it is easier than ever to get cutting edge nutritional information these days. And it all happens on the Internet. Some of the countries top nutritional doctors and nutritionists have phenomenal websites loaded great information and mouthwatering recipes. So it just takes a little time to research the right foods and Lovin of experimentation in the kitchen to get the family on a healthy start.

By TARA PARKER-POPE
The eating habits of American children appear to be shifting. And for a change, the news is good.

Chicken nuggets, burgers, fries and colas remain popular with the under-13 set, of course. But new market research shows that consumption of these foods at restaurants is declining, while soup, yogurt, fruit, grilled chicken and chocolate milk are on the rise.

The findings, based on survey data by the Chicago market research firm NPD Group, follow a report last year that childhood obesity appears to have hit a plateau after rising for more than two decades. That finding, reported by The Journal of the American Medical Association, has been greeted with guarded optimism, and it remains unclear whether efforts to limit junk food and increase physical activity in schools have had a meaningful effect on the way children eat.

But the new data suggest that a number of factors, from the economic downturn to new offerings from fast-food giants, may be influencing a general shift in eating preferences among children.

The data, from NPD’s Consumer Reports on Eating Share Trends, are collected from a representative sample of 3,500 households and 500 teenagers who give detailed information on their restaurant habits. The figures are considered highly reliable because the researchers collect answers daily, asking participants what they and their family ate and ordered at restaurants the day before. While this recall method is never 100 percent reliable, the data, collected since 1976, provide a consistent look at long-term trends.

Clearly, the economy is playing a big part in these trends. Orders for kids’ meals that included a toy were down 11 percent last year, for example, while “value menu” orders were up 9 percent. More recently, children’s orders for cold-cut sandwiches are up 11 percent, a surge that appears to be driven largely by the fast-food chain Subway’s “$5 foot-long” campaign. And after more than three years of growth, restaurant birthday parties for children dropped 5 percent in the quarter ending in February, compared with the same quarter last year.

But economics cannot explain the entire shift, said Bonnie Riggs, a restaurant analyst for NPD. Cheeseburgers, fries and colas are all on value menus, but their consumption among children under 13 has fallen while healthier foods are on the rise.

To be sure, pizza, burgers, fries and kids’ meals are still the most popular items ordered by children; the percentage gains for items like soup and yogurt are from a smaller base. But the trends bolster an argument that children’s health researchers have made for years: if you offer more healthful food, kids will eat it.

“The food industry is always saying, ‘We’re giving people want they want; that’s why we’re giving you chicken nuggets, burgers and fries for your kids,’ ” said Leann L. Birch, director of the Center for Childhood Obesity Research at Penn State. “That’s not really true. If kids are given different options and if parents make them available and let them choose some of those things, I think quite often we see you do get shifts in eating.”

Not every choice is resulting in a more healthful meal. For instance, the NPD data show that breaded chicken sandwiches are on the rise while burgers are declining. On the Wendy’s kids’ menu, the breaded chicken has 340 calories, and a junior cheeseburger has 270.

Among beverage orders, milk consumption is on the rise and colas are down. But orange and grapefruit sodas and root beer are rising.

“The perception might be that orange and grapefruit soda are better for you,” Ms. Riggs said.

Still, it is noteworthy that the NPD data are based on orders in restaurants, where children are often allowed to make their own choices.

“We don’t know how many choices kids really make,” Dr. Birch said. “But my sense is that parents are much more likely to be hands-off in a restaurant situation and allow kids the freedom to make more choices.

“You go to these places where they offer healthy options for adults. But until recently, kids haven’t had the opportunity to choose the right thing.”
Posted by Unknown at 11:51 AM