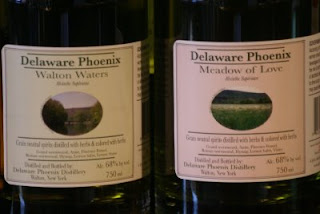 New York State is well-known for its wine. New York State is also home to some world-class craft breweries. And just a few years ago in the Hudson Valley we got a whiskey distiller. But here's the latest news when it comes to alcohol in New York State. We now have an Absinthe producer. And as of of April 1, 2009 Delaware Phoenix distillers has two Absinthe's available in the New York market.

Absinthe at Aroma Thyme has been a huge hit over the last year. We currently six different Absinthe's.
ABISINTHE
St. George (Bistro Best Seller) 12 California
Delaware Phoneix Walton Meadow (Italian Wormwood) 12 New York
Delaware Phoneix Meadow of Love (Virginia Wormood) 12 New York
Kubler 12 Switzerland
Mata Hari 12 Austria
Grande Absenthe 12 France
Absinthe is a distilled, highly alcoholic (45%-90% ABV), anise-flavored spirit derived from herbs, including the flowers and leaves of the herb Artemisia absinthium, also called "wormwood." Absinthe is typically of a natural green color but is also produced in both clear and artificially colored styles. It is often called "the Green Fairy."
Although it is sometimes mistakenly called a liqueur, absinthe is not bottled with added sugar and is therefore classified as a liquor. Absinthe is unusual among spirits in that it is bottled at a high proof but is normally diluted with water when it is drunk.
Absinthe originated in Switzerland. However, it is better known for its popularity as an alcoholic drink in late 19th- and early 20th-century France, particularly among Parisian artists and writers. Due in part to its association with bohemian culture, absinthe was opposed by social conservatives and prohibitionists. Charles Baudelaire, Paul Verlaine, Arthur Rimbaud, Vincent van Gogh, Oscar Wilde, and Aleister Crowley were all notorious "bad men" of that day who were (or were thought to be) devotees of the Green Fairy.
Absinthe was portrayed as a dangerously addictive, psychoactive drug. The chemical thujone, present in small quantities, was blamed for its alleged harmful effects. By 1915 absinthe had been banned in the United States and in most European countries except the United Kingdom, Spain, Portugal, and the Austro-Hungarian Empire. Although absinthe was vilified, no evidence has shown it to be any more dangerous than ordinary liquor. Its psychoactive properties, apart from those of ethanol, have been much exaggerated.
A revival of absinthe began in the 1990s, when countries in the European Union began to reauthorize its manufacture and sale. As of February 2008, nearly 200 brands of absinthe were being produced in a dozen countries, most notably France, Switzerland, Spain, and the Czech Republic.
Posted by Marcus at 8:57 AM