The noted Chicago eatery Blackbird has kimchi on the menu, and California Pizza Kitchen is developing Korean barbecue beef pizza. In Los Angeles, crowds are lining up for street food from a pair of Korean taco trucks called Kogi. The slightly sour-tasting Korean frozen yogurt served at the Pinkberry and Red Mango chains has inspired many imitators.

It's even on the packaged-food industry's radar. "Last year, mostly what we saw in our database was Korean food at authentic ethnic places," says Cindy Ayers, vice president of Campbell's Kitchen, which tracks trends for new-product development at Campbell Soup Co. This year, she says, she's seen Korean flavors appearing on both high-end menus and in casual, nonethnic restaurants in cities like Minneapolis and Des Moines, Iowa -- a sign Korean is starting to catch on.

At Anita Lo's fine-dining restaurant, a dish of skate, avocados and radishes is served two ways. The raw preparation is a raw skate kimchi paired with an avocado and radish salad; the cooked features a sauteed skate filet served with an avocado sauce and a kimchi sauce. "It's sort of classic Korean, rethought," says Ms. Lo.

This Wolfgang Puck restaurant has kalbi, a marinated beef short rib that's a mainstay of Korean barbecue, on the menu. Executive chef Scott Irestone marinates the beef in a miso-soy glaze and plates it with house-made kimchi. "It's our version of kalbi and kimchi," he says.

At his Michelin-starred seafood restaurant, Eric Ripert serves a progressive tasting of Kumamoto oysters on ice with flavored jellies. The final bite is a Kumamoto topped with a cube of kimchi jelly, made by pureeing and straining kimchi, then adding agar agar to the juice. "I use it more and more as a condiment," says Mr. Ripert, who was introduced to Korean food through some of his line cooks. "I like to add it just to elevate and to create some contrast with our dishes.""

Kimchi crisps accompany a scallop tartare with avocado and red onion jam. "I like the fact that [kimchi] is more of a pantry item than something that goes bad," says chef de cuisine Mike Sheerin.

Creamed kimchi accompanies a dish of beef short rib, chanterelle and smoked hollandaise sauce. Executive chef Sean Brock takes homemade kimchi, then adds heavy cream, nutmeg, gruyère and parmesan. "It tones it down, but you still get the complexity of all that spice," he says.

Hobak jun, or fried pancakes that Rachel Yang makes with zucchini at her eclectic American restaurant, are topped with shrimp and a smoked chili vinaigrette. Similarly, yukejang, a spicy beef-and-vegetable soup, gets updated with leeks and crème fraîche. The crème fraîche "gives tang and creaminess" to the soup, Ms. Yang says.

Thomas Keller's flagship restaurant serves dotori mook, a mild, jello-like food made of ground acorns. It's a common side dish in Korea, served sliced and with a sauce made of soy sauce, toasted sesame oil, scallions and red pepper flakes. At the restaurant, the mook is custard-like and made with coffee and milk, and has been paired with persimmon and black truffles. "The flavors are earthy, kind of nutty," says chef de cuisine Corey Lee.

For decades, Korean food stayed largely in Hawaii, where the first Korean immigrants arrived, while Chinese food was colonizing the rest of the country. In recent years, despite a wave of Korean immigration, the cuisine remained mostly in traditional restaurants that catered mainly to Korean-Americans.

That's beginning to change, thanks partly to New York chef David Chang, the cuisine's unofficial ambassador in America. He calls his three Momofuku restaurants "vaguely Asian" and his menus "eclectic," but they showcase Korea's kimchi, the staple of spicy fermented vegetables, in preparations including stew, butter and consommé. For a food magazine's camera crew, Mr. Chang recently demonstrated how to make kimchi, using garlic, ginger and fish sauce to flavor cabbage. "It smells like home to me," he said.

Americans are "searching for new, more-challenging flavors," such as Latin and Asian ones, says Darren Tristano, executive vice president of Chicago restaurant-industry consulting firm Technomic. "Korean seems to be fitting that."

At wd~50 in New York, chef Wylie Dufresne serves a kimchi-banana sauce with lobster. He's made kimchi with pasta and dehydrated kimchi into a "paper" to go with Manila clams. Mr. Dufresne buys the pungent, pickled condiment pre-made at a local Asian market. "It's hot, it's acidic and, depending on the type of kimchi, it's got some sort of umami notes," he says, referring to the savory flavor increasingly accepted as one of the five basic tastes.

Korean food swings from fiery (showcased in soondubu, a spicy, bubbling tofu stew) to mild (the soothing dduk gook, a beef broth-based rice-cake soup traditionally served on New Year's Day). It can take some getting used to. Jean-Georges Vongerichten, a pioneer in fusing Japanese and Thai flavors with French cuisine, shied away from Korean cuisine because of its pungent smells -- before his wife's Korean cooking made him a convert. Now, he says, "I love it. I'm trying to incorporate it more and more into what we do." One recent tweak: subbing out chicken stock in a garlic soup at Jean Georges for a seaweed stock inspired by the Korean seaweed soup miyuk gook. 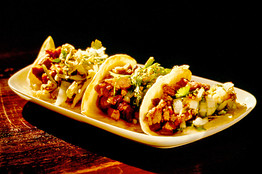 a platter of Korean tacos from Kogi, Los Angeles 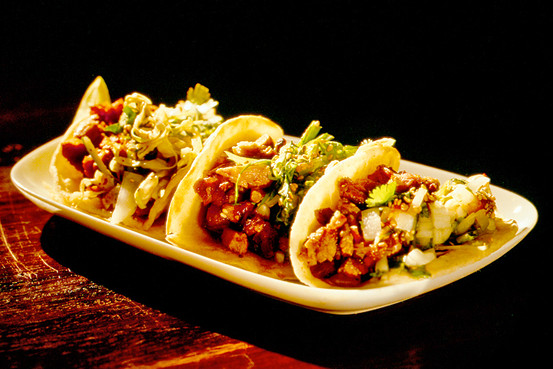 At Joule in Seattle, Rachel Yang's pot-au-feu with sweet soy broth is a play on kalbi jjim, a Korean dish of stewed short ribs. Her vinaigrettes often incorporate kochujang, the spicy pepper paste that is part of the Korean flavor trinity, along with soy sauce and the fermented soybean paste doenjang. Kochujang is an essential pantry item, akin to tomato paste, for Edward Lee of 610 Magnolia. In his Louisville, Ky., restaurant, Mr. Lee slips the paste into his stews and cassoulets. "It brings a sweetness, a depth of flavor, a roundness, to any dish," he says.

While some chefs incorporate Korean elements in Western dishes, others do the opposite. Youngsun Lee of New York's Persimmon creates traditional Korean food, but incorporates Western ingredients such as butter and red wine.

Some entrepreneurs are taking Korean food to the masses. Kogi, the L.A. Korean taco-truck outfit, uses Twitter to broadcast its whereabouts and has a $5 cap on prices. The food brings together Mexican and Korean influences in items like kimchi quesadillas and short rib tacos, and is "cheap, unbelievably delicious and unmistakably from Los Angeles," critic Jonathan Gold recently wrote. Chef Roy Choi says he hopes Kogi will be in New York by 2010. Bulgogi is already there: The thinly sliced, marinated meat, popular in Korean barbecue restaurants, shows up at New York Hot Dog & Coffee, where it's a popular topping. 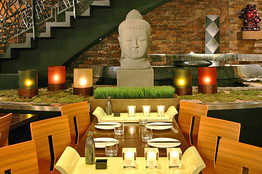 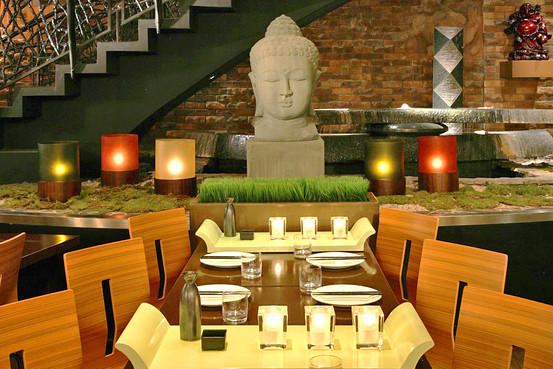 Korean cuisine's rising popularity is anything but coincidental, according to 610 Magnolia's Mr. Lee. Korean immigrants tend to be protective of recipes and resistant to tweaks, he says, in contrast to Korean-Americans who feel more free to play with flavors. "It takes that kind of confluence of culture for ideas to start sparking," he adds. "A lot of other Korean chefs are saying, 'We have this incredible culinary history. Let's take advantage of it.'"

Last fall, a South Korean government minister announced an effort to make Korean one of the world's most-famous cuisines -- and increase export opportunities for the country. The move includes encouraging the renovation of Korean restaurants overseas by making low-interest loans available to restaurant owners and paying consultants' fees. Says Sang Yoon, a French-trained chef who owns the Father's Office gastropubs in the Los Angeles area: "I think everyone's sort of gone through Japanese and Chinese and Vietnamese," he says. "I think we're next."

Write to Juliet Chung at juliet.chung@wsj.com