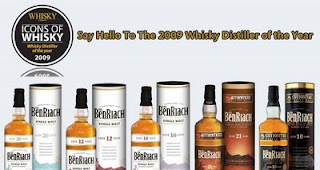 At Aroma Thyme Bistro single malt scotch is one of our best selling spirits. In fact our collection seems to keep growing from customer demand. So this week we are proud to introduce Benriach. This Scotch distiller has won many awards, here's just a small glimpse of their success.

BENRIACH IS WORLDWIDE “ICON OF WHISKY”

THE BENRIACH Distillery Company last night beat off competition from around the world to win the coveted “Icons of Whisky” award in London.

Organized by Whisky Magazine, "Icons of Whisky" seeks to find the best distiller of the year from distilleries in Scotland, Ireland, the USA, Japan and the Rest of the World.

The “Icons”, launched six years ago, are a highlight in the whisky calendar and are designed to celebrate the people and places behind the greatest whiskies in the world.

BenRiach Managing Director Billy Walker said: “We are delighted to be recognized by such a prestigious whisky publication. The award reflects the incredibly hard work of our team and is the culmination of a fantastic five-year adventure.”

BenRiach has already won a number of top industry awards.

It was “Distillery of the Year” in the 2007 Malt Advocate Whisky Awards.

Whisky Magazine named it the “Best Rare Speyside” (for BenRiach Authenticus 21 Year Old) at its World Whisky Awards, also in 2007.

And it won Gold Medal (for BenRiach 16 year old) at the 2006 International Wines and Spirits Competition.

The BenRiach distillery has been producing quality single malt Scotch whisky since 1898. Five years ago it was acquired by Billy Walker, Geoff Bell and Wayne Kieswetter.

Today, in addition to the superb aged bottlings at 12, 16, 20, 25 and 30 years old, the company also includes two peated single malt expressions within the portfolio - the aptly-named 'Curiositas', aged 10 years old, and its big brother, the 21 years old 'Authenticus’.

Last year, BenRiach completed the acquisition of GlenDronach Distillery, a move widely regarded in the industry as the awakening of a sleeping giant.