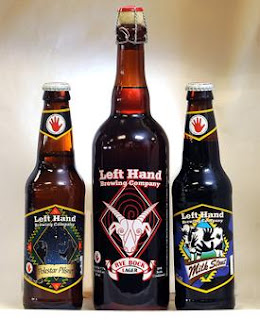 We love Left Hand at Aroma Thyme Bistro. This a great article on how they got started. You can always find several of their selections on our beer menu. You can view our full wine and list here.
Marcus Guiliano
Aroma Thyme Bistro
info@AromaThymeBistro.com
845-647-3000


This Left Hand knows what's brewing right
By Norman Miller/Daily News staff
GHS
Posted Nov 05, 2008 @ 09:05 PM
While most young adults cut their teeth on mass-produced American lagers such as Coors and Budweiser, Eric Wallace was an Air Force brat whose father was stationed in Germany - a country known for its full-flavored beers.

That early experience inspired Wallace when he co-founded Colorado's Left Hand Brewing Company, a brewery known for a wide range of traditional beers.

"When I came back to the U.S., all of a sudden, I hit a brick wall - there's only one beer here, and it doesn't taste like anything," said Wallace, who started the brewery in 1993 along with Dick Doore.

"I had been exposed to bock beers at that point - I knew a lot about German styles, and this stuff (American beer) did not have any flavor, so it was kind of shocking."

After following in his father's footsteps into the Air Force, Wallace returned to the United States a few years later and was greeted with American craft brews that matched anything produced in Europe.

Inspired by a road trip from New Orleans to Alaska and then to Colorado, Wallace asked his former Air Force friend Doore to teach him to brew.

"I convinced him to teach me to homebrew, and then I told him we had to start a brewery," Wallace said.

The brewery, based in Longmont, Colo., rolled out Sawtooth Ale - its first beer - in January 1994. It was an English-style bitter ale which immediately received critical acclaim and was awarded a Gold Medal at the Great American Beer Fest that year. Sawtooth Ale is still the brewery's top-selling beer.

Things were good for the brewery in the early years, Wallace said. They brewed several beers, including the Mother Load Golden Ale (which is not made anymore), the Black Jack Porter and the Ju Ju Ginger Ale.

"The first several years were the first huge wave of craft brewing," he said. "We didn't really know a lot about the logistical side of the business." In 1998, Left Hand then bought out a second brewery, the Tabernash Brewing Company, allowing them to expand their brewing and bottle operations.

For the first time, the company started offering beer in 12-ounce bottles, rather than just draft and 22-ounce bombers. But then the craft brewery industry took a hit. Many breweries didn't survive that time.

"We were over-leveraged," said Wallace. "We had too much debt and our new wholesaler went out of business, and we found out three days before we were to release our 12-ounce bottles. Our sales took quite a beating. We lost, easily, 25 percent of our business. We were booming and then we had the wake-up call from hell."

Luckily, the purchase of Tabernash saved them, Wallace said. That brewery had experienced businessmen on the staff who helped Wallace and Doore survive. They offered private sales of the company's stock which allowed them to stay afloat and carried them through 2003.

"That was the point we knew we could survive," Wallace said.

The company now has a dozen beers available in Massachusetts.

While Sawtooth is Left Hand's overall best-seller, the Milk Stout is the best-seller outside of Colorado, Wallace said. That makes sense because it may be the best milk stout on the market.

"People really, really like it," he said. "It doesn't have a bite too it. It's very soft and round. People come to me and ask what's my lightest beer and I say, 'Try this,' and they look at me like I'm crazy because it is so dark. Seventy percent of the time, they really like it. It's a conscious act to try to convert people and to introduce people to what's out there."

The brewery's Oktoberfest beer is also very popular, Wallace said. He said he's proud they take no shortcuts in brewing the beer, and taking as much time as is traditionally required.

"Not everyone takes eight weeks to lager their Oktoberfest," said Wallace. "It's a pain in the neck."

With more than 100 breweries in the state, Colorado is one of the centers of American craft brewing. It is that competition that makes Left Hand such a strong brewery, Wallace said.

"You're forced to get better or perish," Wallace said. "If everyone is doing a good job, it helps raise the sea level for everyone."

Left Hand beers are available at Fannon's Liquors and Kentucky Spirits in Natick, Kappy's Liquors in Sudbury, Whole Foods Market in Wayland, the Vin Bin in Marlborough, Hickey's Liquors in Milford, Julio's Liquors in Westborough and Marty's Liquors in Newton.

Norman Miller is a Daily News staff writer. For questions, comments, suggestions or recommendations, e-mail nmiller@cnc.com or call 508-626-3823. Check out the Beer Nut blog at http://blogs.townonline.com/beernut/.
Posted by Marcus at 8:39 AM

If you like the left hand brewery, you can find thousands of craft beers in New York City using our system at www.BeerMenus.com. There is no charge, and all beer enthusiasts are welcome!