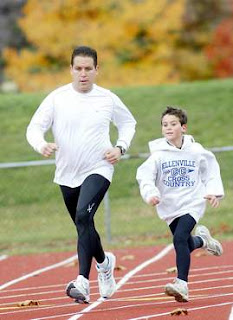 Times Herald-Record/MICHELE HASK
A parent is the single most important role model in terms of a child’s fitness, experts say. Marcus Guiliano, a chef who runs and cycles to keep fit, has started running with his 6-year-old son, Justin.

Making fitness a family affair: How parents can set the standard in their child's health

By Lisa Ramirez
For the Times Herald-Record
November 19, 2008
For Jim Lagarde of Goshen, a good workout used to mean hitting the gym for a solid dose of cardio and strength training.

These days, though, Lagarde's fitness regimen is just as likely to include a good game of Wiffle ball or some one-on-one hoops with his 7-year-old son, Colin.

"I'm a busy person," says Lagarde, owner of PrimoSports in Florida. "But the most important thing to me is to spend time with my family. That is my No. 1 priority."

deadly numbers
Obesity is the single biggest health problem in the United States, says Dr. Richard Noto, chief of pediatric endocrinology at Maria Fareri Children's Hospital at Westchester Medical Center.
He's not alone in his worry: The World Health Organization and the National Heart, Lung and Blood Institute of the National Institutes of Health have classified obesity as an epidemic.
Noto offers these chilling statistics:
• In the U.S., 300,000 deaths per year are attributed to obesity. Only smoking kills more people.
• About 51 million U.S. adults are obese. That's 31 percent of us. And 61 percent are overweight.
• Nine million children ages 6-19 are obese, three times as many as in 1980. And 30 percent are overweight.
• One in every 10 children age 2-5 is obese.
• The child of an overweight parent faces an 80 percent likelihood of being overweight, too.
• Approximately 50 percent of grade-school children who are overweight will remain overweight as adults, and the majority of overweight adolescents become overweight adults.
Risks of obesity
Obesity is, with some exceptions, a health risk of behavior. Poor dietary habits and physical inactivity are the leading factors, and today's kids are particularly vulnerable. They love high-carb foods and spend more time in front of the TV, computer and video games than any other generation.
The habits we form as children stick with us our whole lives. And that's why it's so important to make physical activity part of your family routine.
Finding it hard to become motivated? Ponder some of the consequences of weighing too much and exercising too little:
• Diabetes
• Hypertension
• Heart disease
• Cerebrovascular disease
• Gallbladder disease
• Increased cancer risk
• Arthritis
• Polycystic ovary syndrome
• Sleep apnea
• Skeletal deformities
• Arthritis
• Urinary incontinence
• Syndrome X
• Psychosocial problems linked to social isolation, low self-esteem and depression
He opened his sports center convinced that other fitness-minded parents felt the same way. Schedules are stretched, he says, and finding time to exercise is tough enough. As a parent, he and his wife didn't want to spend precious free hours working out without their children, so the idea of turning workout time into family time — and a business — was a no-brainer.

"For me, the best workout is running around on a field with my kids, and a lot of other parents feel the same way," says Lagarde. "Being active together is a way to cultivate a healthy life for the kids and for the parents."

Lagarde and his center are part of a nationwide trend among parents seeking to keep themselves and their children fit.

Last year, 1.3 million children ages 6-11 were members of a health club, according to the International Health, Racquet and Sportsclub Association. And as of April, a quarter of that association's member clubs surveyed had children's programs. At the same time, more kids and adults are overweight than ever before, and our lifestyles are becoming less and less active.

"They (children) don't go out and play like when we were kids," says Dr. Richard Noto, chief of pediatric endocrinology at Maria Fareri Children's Hospital at Westchester Medical Center. "Good nutrition and exercise needs to be part of the family regimen, a way of life."

At PrimoSports, the family programs include the likes of dodgeball, kickball, basketball and lacrosse. There are fun leagues and competitive ones, and Mommy and Me play groups. The idea, Lagarde says, is simply to get families to play together. The great workout happens almost without anyone realizing it.


"Kids don't want to spend 20 minutes on a treadmill," he says. "They want to run wild. They want to play."


It's all about child's play
Kids' natural desire to play is something that parents should encourage, and even exploit, health experts say. Active, fit children grow up to be active, fit adults and can avoid many of the illnesses that plague overweight, sedentary adults.

"Kids should be active at a very young age," says Dr. Robin Altman, chief of general pediatrics at Maria Fareri Children's Hospital. "Getting them out of the house is really important. It's easier when they are younger (and you can) capture their enthusiasm and set up a family psyche that fitness is necessary and important."

The benefits of working out are twofold: There's the exercise, of course, but perhaps even more critical is the invaluable time together.

"Parents have such limited time with their kids," says Altman. "Working out together is a great way to spend time with them, as well as influence them and encourage them to make healthy choices."


Keep it enjoyable
It's essential, though, that the workout does not become a chore or a source of family disagreements. Share activities that your child enjoys, Altman says, and let him or her take the lead. Younger kids may enjoy tag, hula hoops or taking the dog for a brisk walk; older ones might want a bike ride or competitive game of tennis.

"See what interest the child has. Talk about it together, reach out to them," Altman says. "Let your child be the inspiration."


And since no one has more sway with children than their parents, working out together can establish and reinforce a lifetime of healthy habits.

"It's wonderful role-modeling time; you're making an impression about what's important," Altman says. It's true for adolescents, too, she says.

"It's not always obvious, but a parent is the single most important role model."

For 6-year-old Justin Guiliano, that role model is his dad, Marcus Guiliano, a chef and owner of Aroma Thyme Bistro in Ellenville.

Guiliano began taking his own fitness and nutrition very seriously when he turned 30. He was a fit teenager, he says, but years as a chef had led to weight gain.

"I cleaned up my act," he says, and became an avid runner and a cyclist.

When his kids, Courtney, now 9, and Justin, now 6, were babies, he put a trailer on his bike and the kids came with him. When Justin learned to ride a bicycle, Guiliano would run while his son pedaled alongside.

But soon Justin wanted to run, too.

"I said sure, we could run together. The first time I figured we'd kind of walk/run," Guiliano said. "But he took off and never stopped. Two weeks after his fifth birthday he ran his first 5K. He was always an active kid, and now he's my running partner."

I think experts are absolutely correct when they say that parents are the single most important role model in terms of a child’s fitness.