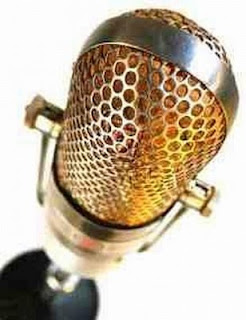 * The voice and guitar of Brad Commeau
* Performances by guitarist Freddy Johnson
* Aroma Thyme Bistro staffer Stefany Ruiz doing Jason Mraz's "I'm Yours" and Jewel's "Save Your Souls"
* Elizabeth Sullivan and Natasha Althouse teaming on Sullivan's original songs "Another Day" and "This Time"
* The singing of Russ Damsky, and
* Members of the audience participating in a round of "Match Game" with prizes, hosted by Lorie Kellogg.

You can hear the best of that night online at:
http://www.prx.org/pieces/23037

More on Joe Bevilacqua can be found at: www.joebev.com.
Posted by Unknown at 11:46 AM