Yukon River Salmon Article, see why we love this Salmon 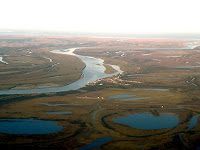 We buy from a great company called Eco-Fish and they keep us up on the current catch. We need day to day reports or we will miss great catches.

For Salmon Fishermen, It’s Fall Chum to the Rescue
For the Yup'ik people of Alaska, fall chum is the answer to a troubled fishing season and a link to the outside world

For Salmon Fishermen, It’s Fall Chum to the Rescue
Explore more photos from the story


For the first time there's no fishing for chinook salmon on the California coast. The search is on for why the prize catch is so scarce.

I've flown 1,800 miles to a remote part of western Alaska but I still have 140 to go before I hit the wild salmon jackpot. I climb into an Amelia Earhart-style Cessna that soars across the nearly treeless tundra and over the mighty Yukon River Delta, in the direction of the Bering Sea.

From 10,000 feet, the view is the stuff of nature documentaries, a breathtaking early autumn palette that includes marigold yellows and oranges with splashes of chartreuse that bring to mind the bold brushstrokes of a post-Impressionist painting. From my window, I see flock after flock of swans; the spectacular scenery fails to bore the pilot, who holds a digital camera in one hand and is intent on showing me a moose.

Ninety minutes later, our itty-bitty flying pencil bounces onto a dirt airstrip, and at long last, our X has marked the spot—the Yup'ik Eskimo village of Emmonak (pronounced E-MONIC; the locals call it "Emo").

A dirt road leads us into town, a motley assortment of plywood homes and the most basic of services: a general store, school, medical clinic and police department among them. There is no bank for the 849 villagers, but there is a gas pump that currently reads $7.25 per gallon. A motorboat trip upriver—which I came to refer to as the "Yup'ik highway"—now costs 300 bucks.

Autumn—the brief period before the river freezes—is a busy time here in Emo. It's prime moose hunting season, and when seals—valued for both their iron-rich oil and flesh—are easy targets where the river drains into the Bering Sea. On the tundra, a buffet of wild berries—blueberries, crowberries and lingonberries—awaits, promising a winter-long supply of Vitamin C. Hunting and gathering is a way of life for the Yup'ik people, a 10,000-year-old indigenous culture that largely relies on a subsistence diet (of which salmon is a mainstay).

Unlike these other subsistence staples, salmon, which was nearing the end of its season when I arrive, is the one economic link between the Yup'iks and the outside world.

The company making that connection is Kwik'pak Fisheries, a cooperative of six Yup'ik villages owned by Yukon River Fisheries Development Association, a quasi-governmental group based in Anchorage.

For this year's season, Kwik'pak employed nearly 600 villagers, including 375 fishermen who traverse the lower Yukon on flat-bottomed skiffs, using gillnets pulled in by hand. In 2005, it became the first and remains the only certified Fair Trade fishery in the world, a commercial standard that ensures a fair price and secure working conditions for the Native Alaskans who work the fishery.

There are just a few days remaining of this year's season, which was late, slow and proceeded in fits and starts. (It could have been worse: California's salmon season was completely cancelled this year.)

But first, the salmon life cycle in a nutshell: Salmon are anadramous: They're born in fresh water, migrate to the ocean, then return to fresh water to spawn—and die. Yukon salmon spend between three and seven years (depending on the species) in the Bering Sea before their return journey upriver.

Typically, the season on the lower Yukon opens in mid-June for the short-lived run of the highly prized (and pricey) king or chinook (Oncorhynchus tshawytscha), but this year, Alaska Department of Fish and Game, citing low estimates based on sonar technology, called off king season and told fisherman to wait it out for the summer and fall chum (Oncorhynchus keta), also marketed as keta and coho (Oncorhynchus kisutch), sometimes called silver.

July 3 was the first day Kwik'pak fisherman could go out on the river, but it wasn't long before the state agency closed the season again, this time for most of August. As a result, says Kwik'pak general manager Jack Schultheis, this year's catch—just shy of 1.5 million pounds—is down by half, compared to last year.

There is some consolation to this year's up-and-down fish drama, and its name is fall chum. It could be argued that the very delay and ultimate closure of this year's Yukon king season was a golden opportunity for the second-tier (and often overlooked) fall chum to step into the freshwater limelight.

A paler fleshtone and a big set of teeth have earned Oncorhynchus keta the nickname "dog salmon," characteristics that have it difficult to win over the American palate. In its first few years of operation, Kwik'pak was selling all of its fall chum to Japan. This year, says Schultheis, marks the first big marketing push in the Lower 48 for fall chum, which is why you may have seen it at seafood counters this summer.

Chefs in increasing numbers are cozying up to fall chum, admiring its versatility and rich flavor that is comparable to the beloved king.

Fall chum "blows other salmon out of the water," says Christine Keff, chef-owner of Flying Fish in Seattle. "It eats very well, with enough oil to give it good flavor, but not too strong. We have had very good response to it in the restaurant."

"I only buy chum from the Yukon. We call it the Kobe beef of salmon. The flavors are so intense that we hardly do anything to it in the kitchen—pan-sear it with just a bit of high-quality sea salt, no sauce necessary. When you taste this fish, the fat content is unbelievable."

There is science behind all that naturally occurring flavor. In anticipation of a 2,300-mile journey upstream (the length of the Yukon River), the fall chum stores enough fat to fuel the distance, resulting in oil-rich flesh. According to Fred Bue, a biologist at Alaska Department of Fish and Game, the fall chum swims a minimum of 1,000 miles to spawn, a much greater distance than its summer counterpart, which may go half that distance. "They have more energy reserves to carry them further upstream, which gives them a higher fat content," says Bue of the fall chum.

A Kwik'pak-sponsored lab test indicated an average 16 percent fat content and more than four grams of Omega-3 fatty acids, in a 100-gram serving of Yukon fall chum. Omega-3s, as they're commonly known, are the anti-inflammatory heart-healthy and brain-boosting fats that Americans are clamoring for, found in fish and nut oils. In contrast, the same size of king salmon from other rivers is much lower in Omega-3s—about 1.5 grams.

For the Yup'iks, fresh salmon is not meant for the grill but for the smokehouse. During the summer, families set up camp along the river and dry salmon that's been cut into long strips. The dried strips are then cold smoked (below 100 degrees for at least 24 hours) resulting in tasty morsels akin to jerky but less leathery. They are eaten as snacks, providing nourishment (and tons of fish oil!) throughout winter's deep freeze.

The final day of salmon season came and went with a wimper, on a quiet note. I went out with Kwik'pak employee Jacob Kameroff, who drove me upriver in search of fisherman Humphrey Keyes, a lifelong Emmonak resident. Earlier in the week, I had spent the afternoon with Keyes and his wife, Ellen, also his fishing partner. We couldn't find their boat, as they returned to shore early, the result of a quiet day. The salmon were few and the pursuit of silver-skinned pink flesh was over—at least for now.

While some fishermen would gear up for a small commercial run of whitefish, many were setting their sights on the winter and supplementing the subsistence larder with moose, geese, berries and maybe even a beluga whale.

In a recent telephone conversation, I asked Humphrey how he felt about saying goodbye to an up-and-down season. Was he relieved, I wondered, and eager to tackle the other work to be done.

"I kind of miss fishing," he says wistfully, in a recent phone conversation. "I miss the days out there, just drifting. The last day, it was kind of bittersweet."

His total catch for the year was 2,023, he reports, a combination of summer and fall chum. "Every one of the fish was done by hand—icing and bleeding," he says. "I'd have to say that's something to be proud of. Now someone down states can sit back and have some of the freshest and the tastiest fish in the world."
Posted by Unknown at 12:57 PM

Thought you'd be interested in this short omega-3 video: http://www.youtube.com/watch?v=eIgNpsbvcVM